100 Places in Greece Every Woman Should Go: A Church that Grows Trees 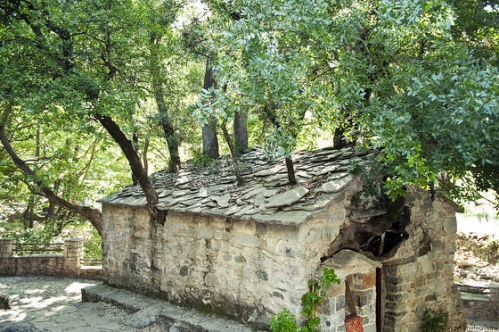 Chapter 52: Saint Theodora's Chapel - The Miracle of the Rooftop Trees

Deep in the heart of Greece's Peloponnese lies a tiny church that sprouts trees. It seems hard to believe, but seventeen mature trees literally grow from the roof of this eleventh-century structure, something that scientists have been unable to explain, and that others call a miracle.

The story of the church dates back to the 10th century. In a lush mountain gully near the village of Vastas, lived a girl named Theodora. At the time a law stated that every family needed to send at least one male to fight as a soldier or be forced to pay a tax. Theodora's family was very poor, and to avoid her father having to serve duty, she volunteered. When bandits raided the region, Theodora disguised herself as male, calling herself Theodore. She not only managed to keep her identity a secret, her valient fighting won her many admirers. Among those included a young woman from the region who became infatuated with 'Theodore' and spread a rumor that she had become pregnant by him. Theodora's commander gave her two options: either marry the girl or face execution. Theodora could have saved  her own life by revealing her identity, but this would have caused her father to face punishment, so she did what saints do: took the retribution herself. Upon her death she was heard to cry out: "Let my body become a church, my blood a river and my hair the forest."

Moved by the bravery of this young woman, the locals erected a church at the site of her grave. Legend has it that a river rerouted itself to run beneath the chapel, and that its holy waters nourish the miraculous trees that sprout from its roof. Some say the entire site feels like a living, breathing relic, and there are those who believe Theodora's deathbed wish came true: that her body became the church, her blood the river, and that her hair became the magical forest of seventeen trees sprouting from the chapel's roof.
Email Post