Goddesses in the Dust: Greece and Pluto 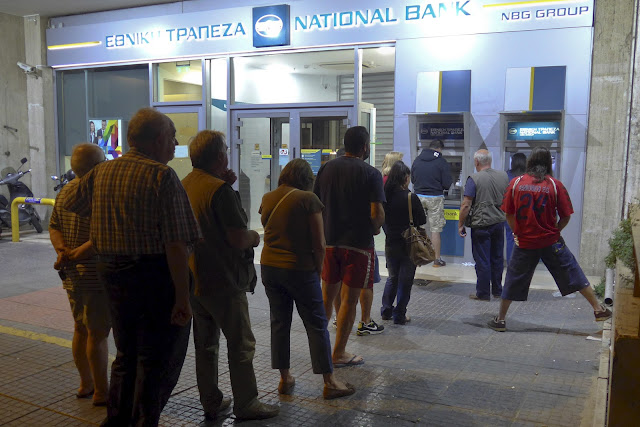 Economically, things have been bad in Greece, but they are about to get worse. These lines at ATMs remind me of stories I read about the Great Depression and runs on the banks.

I have many friends in Greece and am very concerned about how things will pan out in the coming days, weeks and months. If Greece leaves the EU, which seems imminent, then they will have to return to the drachma. With the country in economic collapse, how will they print their own currency? They can't even pay their own paychecks. Banks are closed, so how will people survive and pay their bills?

So many questions unanswered. I can't help but think of the god Pluto. You know, that planet on the outer reaches of our solar system that was just demoted as a planet? Well the word comes from ploutos, which means wealth in Greek. Pluto (known as Hades in Greek mythology) is the god of the underworld, which rules the bowels of the earth, including excrement, and all manner of things taboo that folks don't want to discuss. But in order to heal these things, they must be brought up into the light and that means some serious digging. Yet Pluto also rules the riches and wealth to be found in the earth's crust, so there is duality to this deity. There where you find shit you can also find diamonds.

I wish my beloved Greek companions the ability to dig deep and discover the massive wealth that is buried just beneath the surface of this powerful and ancient culture. It is the indomitable spirit of the people that will be its saving grace.
Email Post