Goddesses in the Dust: Mothers and Daughters and Digging in Tombs 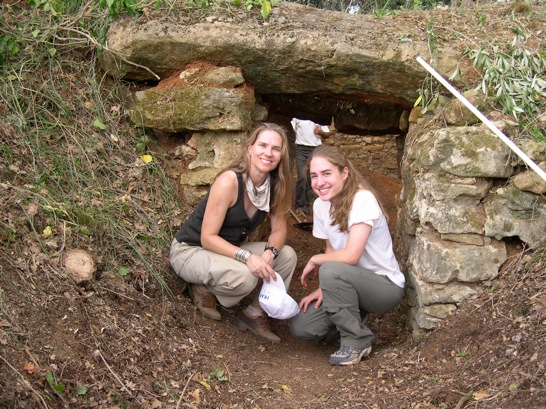 A few years ago, my daughter accompanied me on our archaeological excavation in Greece. My primary task for the summer was to excavate two 3000 year old tombs. The tombs had been excavated some 50 years previously and filled in - we were re-excavating them so they could be opened to the public as official archaeological sites.


Working side by side with my daughter I naturally thought of Persephone, who is pulled into an underworld realm by the god of the underworld, Hades, and her mother, Demeter, who wanders the earth refusing to let anything grow until her daughter is returned to her. It also got me thinking about how these specific tombs we were excavating - called tholos tombs - were feminine symbols. The ancient Greeks fashioned tholos tombs in the shape of beehives, which were built into a conical shape with large blocks, a sloping roof and held into place with a keystone.


The beehive shape resembles a womb and reminds us that we are held in a vessel at both the beginning and at the end of our life cycle. In D.J. Conway's book, Maiden, Mother, Crone, she describes the tomb as a womb symbol of the Dark Mother. It also represents the subconscious and the resting period of the "dense-matter body while it undergoes transformation."


Tombs and the Underworld share similar characteristics, and psychologists often describe the Persephone myth as symbolizing the period of transformation a girl must undergo to become fully conscious as a woman. The Underworld, or unconscious, is the eternal cauldron in which our psyche becomes transformed, and oftentimes through challenging circumstances. Wombs and tombs resemble cauldrons, what Conway calls "the belly-vessel of rebirth; the first recycling center run by the Goddess."


Greece has been such a place of transformation for me, challenging me over the decades to face the unilluminated areas of my psyche and learn to incorporate them into my creative life. I am happy to have shared this experience of excavating ancient tombs with my own daughter and I celebrate the mythological and psychological parallels. Since this time, she has herself transformed from a girl to a young woman, and I am a proud Demeter, watching her grow. Whether we are aware of it or not, all mothers and daughters pass through these phases symbolized by the Persephone-Demeter myth, and the eternal goal is ever the same:


to become wise women who see in the dark.
Email Post