Goddesses in the Dirt: Athena, the Round Temple, and Me 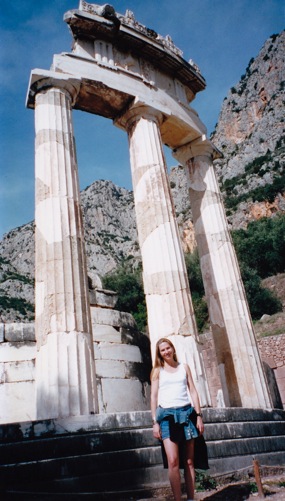 Ever since I was a young girl, I have been attracted to round temples. And I have had the pleasure of visiting one of the world's most famous round temples on many occasions - the temple of Athena Pronaia, which is the gateway to the sanctuary of Delphi in Greece. The word pronaia means entrance, and the temple is the first place worshippers would come before entering the precinct. Athena means wisdom, and as the guardian of the feminine principle, it is through her that the veneration of the ancient Earth Goddess and the feminine archetype itself was brought from prehistoric times into the Classical period of Greece.


Delphi began as a small Mycenaean community in the 16th - 12th centuries B.C. with an oracular cult devoted to worship of the Earth Goddess. Around 1000 B.C. a new god was brought in by invading tribes and Apollo became the main god of worship. Yet the need to consult the oracle remained a key reason to visit Delphi throughout antiquity.

The ancient Earth Goddess cult on which the site was founded remains alive in the round temple. Delphi is the site of the omphalos, or 'navel' of the earth. The circular building (known as a tholos) was thought to be adorned with Corinthian capitals in the temple's interior. Standing in the center of the columns, all capped with the distinctive leaf-adorned capitals distinctive of the Corinthian style, was possibly meant to recreate the sacred forest glens of the Earth Goddess cult.


The architect Vincent Scully has been quoted as saying, "the omphalos, or navel, which was supposed to mark the center of the world, was kept in the sanctuary of Apollo's temple itself (in the center of nearby Delphi), but the tholos of Athena's sanctuary more clearly seems to evoke the navel of the earth than does the other building there."


I could tell you that the tholos was built around 400 − 375 B.C. and was constructed of Pentelic marble. I could tell you that it is 13.5 meters in diameter and consisted of twenty Doric style columns on the outside of the structure and 10 Corinthian columns lining the inner circle. The archaeologist in me recounts the facts and history of ancient sites. But on her first visit to Delphi, the girl in me felt a visceral connection to this terrain. I have no facts for that, no logic. In this place, at the intersection of Apollo and Dionysus, facts and logic give way to mystery and unknowing.


I remember the first time I saw the temple. I was traveling through Greece with my parents and sisters. This hillside location was formidable and awe-inspiring, and I knew in my bones that this place was sacred and powerful. This image captures the moment, my mother looking at the camera, my father staring off into the ethers, like Apollo surveying his kingdom. And me, a young girl in a red sundress, on my way down the path into the valley below, in search of whatever mysteries awaited me in the Greek landscape. There would be many in the decades ahead, and a small round temple lying just off in the distance would only mark the beginning. 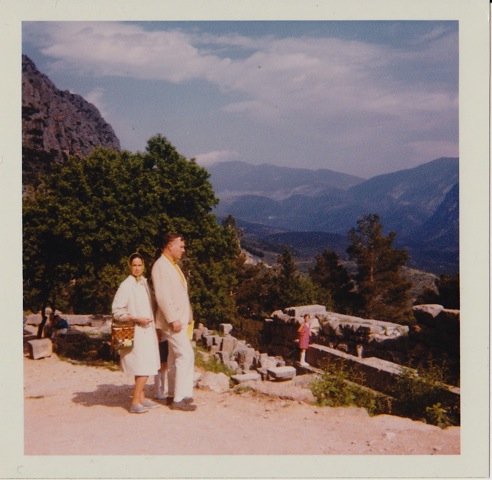