Goddesses in the Dirt - Running with Athena 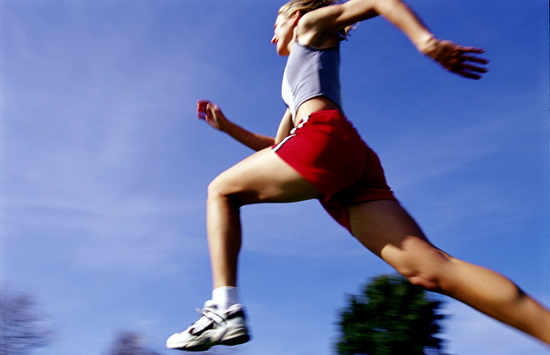 
When I traveled to Greece last fall, I decided - for the first time - to pack my running shoes. Yet when I landed in Athens: City of Athena, the goddess of war and wisdom, it didn’t take long to remember it was also a city of noise, pollution, and overwhelming traffic. Years ago, I used to live in this concrete jungle. Braving floods in the winter with water up to my waist as it cascaded down the steep streets after a heavy rain; dodging cars as they crawled over the edges of sidewalks during rush hours. This was no place to run. At least, that’s what I thought.


Then I remembered the new pedestrian path located behind my hotel. It used to be a busy downtown street, but in 2004 it was cobblestoned over and made into a pedestrian mall just in time for the Athens Olympics, creating a haven of peace in the center of the city. I took the elevator down to the lobby and crossed the marble floor: the automatic glass doors parted and I stepped out into the bright November sun. Turning right, up the hill, I raced tour busses as they gunned their way up the steep incline. Turning right again, past the neoclassical town houses that marked the original architecture of Athens, when it was a beautiful city nestled underneath the ancient marbles, not a smear of concrete as far as the eye could see. Turning left; a group of older women were coming towards me, their arms locked in military precision, their fine wool coats dusting the stones. I felt their gaze as I sprinted past, faster now. The road widened – to the right, clusters of pine trees, flagstone steps leading into the Herod Atticus theatre. A clique of black-clothed teens, smoking cigarettes.
A little further down, the road forked: I took a right and the path yawned towards the flea market of Monastiraki.  Running along, I got up to speed, Paul Simon’s Rhythm of the Saints thrumming through my earphones, the cypress trees on the cliffs above like so many notes on a musical score. Suddenly, there was an opening in the screen of green and I saw it: the virgin temple, looming above. I could feel tears coming to my eyes – I was used to running at home, the expected houses of my neighborhood, the typical Midwestern sky above. But here………I felt like I was in a dream: I had the Parthenon all to myself. There she was, bobbing above me as I made a turn down a path, a fenced gravel road that offered pedestrians a shortcut through the archaeological site.


Through the chain link I saw small piles of abandoned ancient stones from former excavations. Where did they all belong? Numbered in bright red ink, they sat like old men waiting for death. A former Greek boyfriend had shown me this secret path, where Athenians could grab a moment of ancient silence and have these sacred structures all to themselves.
The gravel road ended at the Plaka near the entrance to the ancient marketplace. I did a small circle and jogged back up the path again; at the last minute, I decided to take a detour. This time the path was completely wooded on both sides, the wide flagstone steps leading upwards. An old man with his dog puttered in the grass, I breezed past two lovers sitting on a wall, embracing and leaning into the airspace around the Parthenon as if their lives depended on it.
Up, up, up……I felt the city sliding into the background, Bruce Springsteen screaming into my ears about the Glory Days. One, two, three minutes went by and I found myself alone. At the top of a rise, I stopped. There, spread out below me was the city of Athens, a mass of eggshell colored buildings lapping up against what little green appears in the frame, but mostly suede colored earth, rimmed by a slice of turquoise sea in the distance.
I took my off headphones and listened to the noise of the traffic fade away in the distance, leaving only the sound of bees hovering above the grasses and birds telling their stories from the pines. Behind me was the monument of the Pnyx, looming above the city like a stunted lighthouse. I waded through the monkey grass; taking one more look around to see if anybody was watching, I lay down on the earth. It felt warm, accommodating. The sky was blue, but the blue of old glass, the blue of cataracts. Clouds washed by, but I knew they were ancient. This was not my Midwestern sky. I was looking through time at another place. I sensed ancient women standing near by and the swish of himations, the classical white garments, the soft step of leather sandals. A flute playing and then a lyre. I closed my eyes and imagined the Pynx hill covered with initiates, their robes flowing, readying themselves for a ceremony.


How many feet had tread these stones in the passing centuries? Who had stood here and what had they thought about? Had they looked down and seen - not concrete apartment buildings - but the white hot rock surrounded by the sharp, stabbing cypress? Did they think it was beautiful, as I did? Underneath all that concrete, all that asphalt, lay a shimmering civilization. As long as I have been traveling to this place, it has always felt that a part of me slipped through a crack to that time.


It seemed like eons, but the present invaded my reverie with the sound of someone walking past. I hoped they didn’t see me lying here. Who was that in the bushes - a dumb tourist taking a nap? Foul play? Before I gave them a chance to see me I stood up, dusted off my shorts and plugged my earphones back in. Seal was cuing up, my blood was flowing back in anticipation of finishing my run. With the opening lyrics of Crazy vibrating in my ears, I turned back towards the path.


Good choice of music: I was just another crazy foreigner running past the monuments, but somehow I felt a little lighter in my step, my pace a little quicker. Suddenly I realized I wasn't alone: I was aware of goddesses all around me.....and one of them stood out. I sensed her presence all the way back to the hotel, her tunic snapping in the breeze, the sound of her sandals slapping against ancient stone. I may be only a mere mortal, but on this particular morning I was grateful for the wings the goddesses attached to my feet, I was grateful to have discovered a quiet ancient corner in this overwhelmingly modern city. And as I turned back onto the cobblestone path, past the old ladies cloaked in black, underneath the silent gaze of the Parthenon,


I was grateful to be running with Athena. 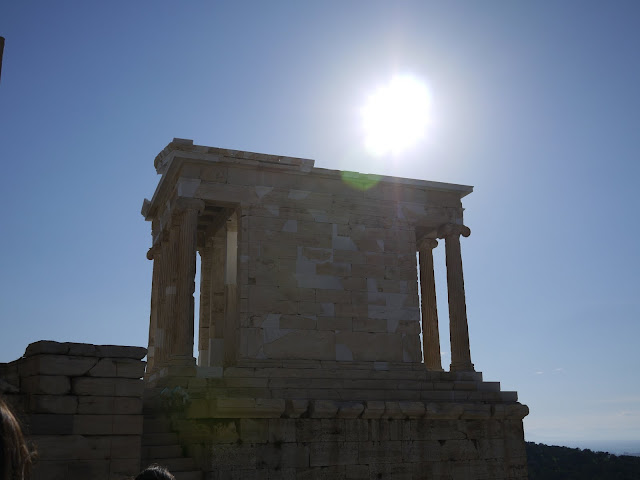