Goddesses in the Dirt - Issue #18: Our Lady of Guadalupe


In 2005, I traveled to Teotihuachan, an archaeological site in Mexico known as the place "where men become gods." I assumed this applied to women as well, as I was doing a first: traveling with a group of women on a spiritual retreat.


I enjoyed meeting and mingling with women who had come in from all over the world. Every day was spent at the site, walking the sacred pathways which the ancients followed, and climbing the Pyramids of the Sun and the Moon, where we held meditation sessions. One of the leaders in particular caught my attention. She had been a student of Don Miguel Ruiz, the author of the book, The Four Agreements, and her name was Rita.


One evening, the group was invited to dinner at an artist's studio near the site. I noticed the walls were decorated with a large mural and was told it was a copy of the original Virgin of Guadalupe, whose image appeared to a peasant named Juan Diego on December 9, 1531 in the Tepeyac desert. According to the story, the Virgin requested that the peasant ask the local Bishop to erect a church on that very spot. When the Bishop asked for proof of the Virgin's appearance, the peasant brought back her image on the cloth of his garment. The garment, called a tilma - made out of poor quality cactus cloth - should have deteriorated long ago, and not have lasted almost 500 years. As such, it defies scientific explanation.


History tells us that Mexico was conquered by the Spanish only a few years before the image appeared to Juan Diego, and there are schools of thought that state the image is not miraculous but is the work of a native artist from the 16th century. Either way, between 18 − 20 million pilgrims visit Our Lady of Guadalupe each year seeking cures, and the list of miracles attributed to her image is remarkable. Being raised Catholic, I had assumed that this beautiful copy on the artist's wall was the typical depiction of the Virgin - cloaked in her robin's egg blue gown and hands clasped in prayer. Traditional symbolism states that her figure stands on the crescent moon - a symbol of the night and darkness - to show the then Meso-Americans that she was more powerful than the god of night. Guadalupe is a form of a Nahuatl word which means "to crush the serpent," and in the image, the Virgin is standing on top of a snake. The angel supporting her depicts the dawning of a new age, and signifies that she is royalty, as dignitaries were always carried on the shoulders of others. Her blue gown is the color of royalty and the rays around her signify the sun, which she is extinguishing, showing her as more powerful than the sun-god, Huitzilopochtli, whom the 16th century Meso-Americans worshipped.


What I didn't know was there was a lot more to the symbolism than I had ever realized. Rita proceeded to explain to me that the Divine Feminine is hidden in the image - not so hidden if you look closely - and the oval nimbus around her figure, edged in red, symbolizes the vulva and the entrance of life into this world.

After looking at the image for a long time, I realized I was witnessing the portrayal of female power in a whole new light. I've spent much of my life questioning the church's treatment of women and wondering why the female was shunned for being the evil sex. After so many years, it was refreshing to view an image of the feminine that combined the sexual and the sacred into one.


The artist Alma Lopez has created her own version of this iconic image, aptly entitled Our Lady of Controversy. 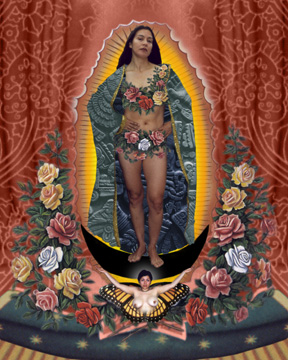 While I was never able to see the original Our Lady of Guadalupe, I appreciated the opportunity to be introduced to its complex iconography - however one chooses to interpret it - through this beautiful replica. Thanks to Rita's insight, I realized the Divine Feminine is abundantly present all around us — 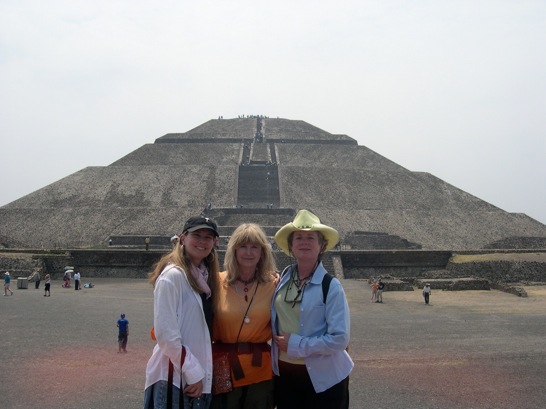 and while Teotihuachan is known as the place where men become gods, all women can become aware of the goddess within.