Goddesses in the Dirt: Thesmophoria - Women Swearing and Throwing Piglets

Unearthing the Divine Feminine, one archetype at a time...... 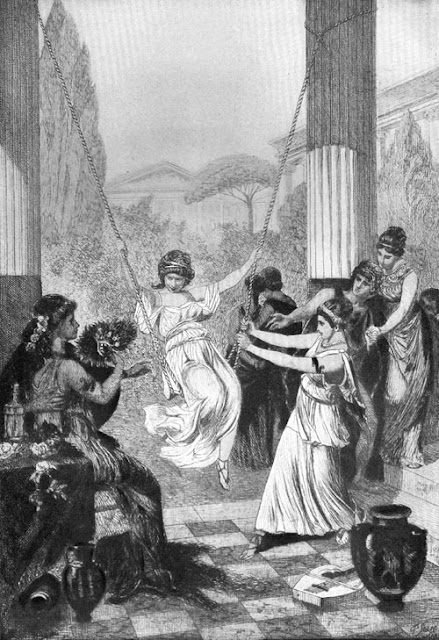 
The Thesmophoria was an ancient fertility ritual practiced only by women in honor of the goddesses Demeter and Persephone. Ancient Greek women were not allowed to spend time away from their husbands except for this rite, and enjoyed the opportunity to be independent. The festival was most likely held at the site of the Pnyx, a hilltop in Athens. It lasted several days - some accounts state three days and two nights, some accounts say it lasted five days. It was held from the eleventh to the thirteenth of Pyanepsion (which roughly corresponds to the month of October.) For the duration of the ritual, women abstained from sexual relations and avoided foods connected to the goddess Demeter, such as the pomegranate, whose seeds were considered offerings to the Chthonic, or earth-related deity. Virgins were not permitted to attend the festivities.


Prior to the onset of the rites during a period called the Stenia, selected women placed fertility objects, such as phallus shaped bread, pine cones and sacrificed piglets in a snake-filled pit and waited for the contents to decompose. Then the women retrieved them and placed them, mixed with grain, on an altar.


The festival consisted of three distinct parts: the Anodos, meaning 'the way up', the Nestiea, or the fasting, and the Kalligenia, or 'beautiful birth,' and celebrates the myth of Demeter, the goddess of agriculture, who mourns the abduction of her daughter Persephone by the god of the Underworld, who does not allow anything to grow until her daughter is returned to her.


The first day  - the Anodos - was the procession in which women approached the cult area carrying offerings. The second day was spent in mourning in honor of the goddess Demeter's sadness as she pined for her daughter's return, taking no food or drink. This was followed by a period in which the women engaged in foul language and jokes, in honor of Demeter's servant, Iambe, who attempted to cheer up her mistress by telling her jokes to bring her out of her sorrow. This also served to help the participants let off steam after a day of fasting and self-discipline.


The strangest activity was during the the third day, which involved the sacrifice of piglets - specifically ones that had been previously thrown into chasms (in antiquity, piglets were associated with female genitalia and as such, fertility.) This commemorated the disappearance of the pig farmer Eubouleus, who fell into the crevasse of the earth along with Persephone when she was being abducted by Hades.
Like many other rituals, the Thesmophoria was directly connected to the agricultural cycle and celebrated the seasons of planting and of harvesting by honoring the goddesses responsible for the fertility of the crops. It was one of many rituals throughout the year celebrating the sacred festival cycle of grain, including the Haloa (December), the Lesser Mysteries (February) the Skirophoria (June) and the most famous mystery cult of all, the Eleusinian Mysteries, held from 15 - 21 Boedromion (September).