Goddesses in the Dirt: Astarte 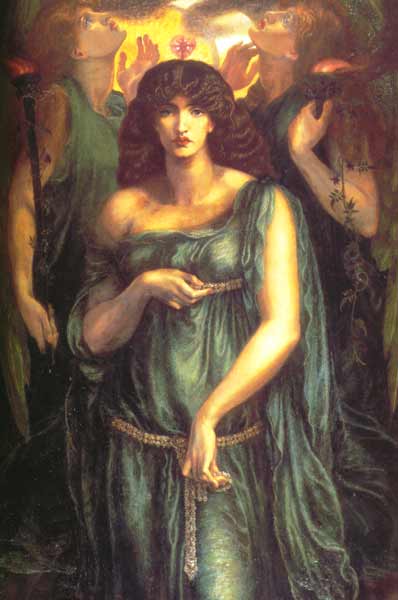 Dante Gabriel Rossetti, Astarte Syriaca, 1877
Goddesses in the Dirt - Issue #13: Astarte
Before the Yahweh cult emerged, the goddess Astarte was worshipped among the Hebrews of the ancient Middle East. As the Phoenician goddess of fertility and reproduction, she is associated with the Assyrian and Babylonian goddess Ishtar, the Sumerian goddess Inanna, and Demeter, the goddess of agriculture of ancient Greece. She was the sister and co-consort of Baal, a Canaanite fertility deity whose death and resurrection was celebrated annually.
King Solomon built a temple to her in Jerusalem, worshipping her under the name of Astoreth. Originally deified as the evening star, her oldest temple was erected at the city of Byblos (in modern Lebanon) and she was known throughout the eastern Mediterranean from the Neolithic to Classical periods.
When the Second Temple was destroyed in Jerusalem, Astarte disappeared as Judaism took a monotheistic turn, but she survived through the mystery religions which celebrated the death and rebirth of the goddess figure in annual agricultural based rituals. Many other gods and goddesses are celebrated in similar annual rituals, such as the Persephone-Demeter myth cycle at Eleusis, the dying god Tammuz, and the Egyptian god Osiris. Some scholars believe that the death and resurrection of the Christ figure has a great deal of precedent in ritualistic culture throughout the ancient Middle East.
The bull and dove are sacred to Astarte. She is often portrayed with a bull's head or wearing horns, which is also associated with the crescent moon and her aspect as Moon goddess (in Egypt she was worshipped as Hathor, the goddess wearing the bull's horns). Offerings of honey, incense, beer and wine were made in her honor, as well as egg and the pomegranate, also known to be sacred to the goddess Persephone.
Photo courtesy of Google images
Email Post
Labels: Astarte Goddesses in the Dirt