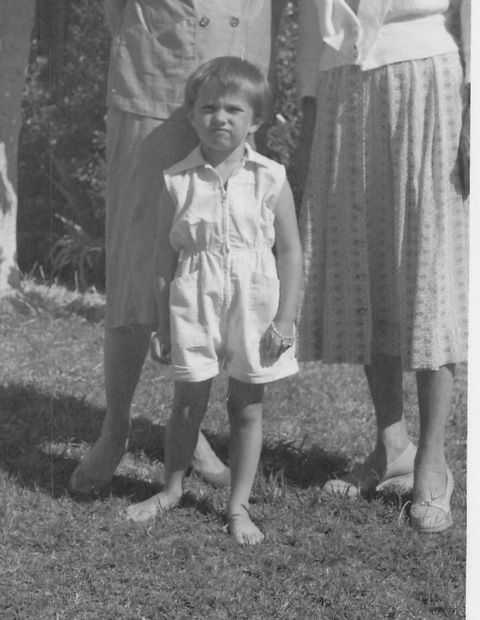 yeah. that's me. doing my best deniro at age 3 —
you talkin to me?
just another scowly faced little punk with her seersucker jumpsuit on.
but nice bowl haircut — and i like the bracelet, too. while my hair is longer these days an armload of bracelets is still one of the few touches of femininity you'll see on me. i'm still that punk little kid with a scowl.
thanks so much to all of you who read my blog. it's been up for a little over a year and i really enjoy this world of blogging. it reminds me of when i was in kindergarten and was given a sheet of waxy paper and pots of paint. i'd lower my fingers in and gushhhhhhhhhhh the colors, smearing all over the greasy paper. it felt like heaven and i remember thinking if life was going to be like fingerpainting then i could get damn used to it.
so while blogging may not be exactly like fingerpainting, all this cutting, pasting and manipulating of images — and accompanying them with any words that suit me, well - it's not far off.
so - (even though i'm on the road and will be posting soon from where i am currently - in Israel) - in honor of my 100th episode of cyber-fingerpainting, i'm sharing a little info about the scowly little punk by answering a list of questions i've seen circulating around blogdom, called 100 things I have or would like to accomplish:


Bold are items I've "accomplished."
Items in red are things I'd like to accomplish one day.

thanks again to everyone who reads travels with persephone - i really appreciate your visits ;-)


in the coming weeks, i hope i entertain with some posts from the underworld - an excavation in greece.
xoa
Email Post
Labels: 100th post