Goddesses in the Dirt: Penelope of Ithaka

Unearthing the Divine  Feminine, one archetype at a time...... 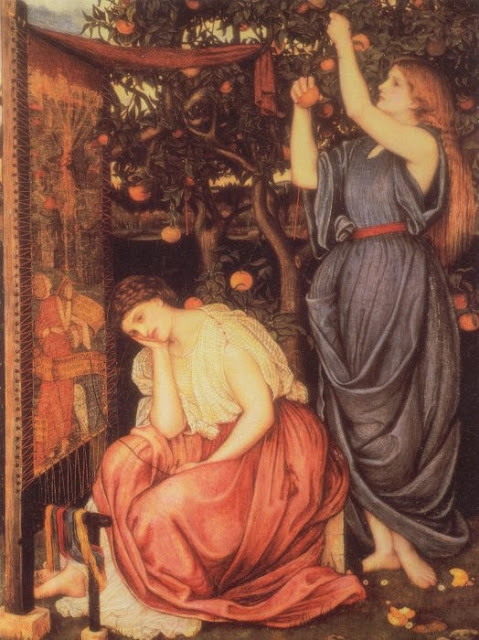 Issue #11: Penelope of Ithaka
Penelope is the wife of Odysseus, the hero of the epic poem, The Odyssey, written by the bard Homer. Odysseus' adventures comprise the balance of the story's action: from sailing to Troy to fight alongside Achilles and coming up with the idea for the Trojan Horse, to blinding the Cyclops and pissing off his father, Poseidon the god of the sea. Bad idea. Just as Odysseus is getting close to home - the island of Ithaka - after 10 years away, Poseidon blows him off course and forces him to spend yet another 10 years trying to get back home. And what keeps him going all this time, while he narrowly avoids getting sucked into the Scylla and Charibdes, drawn upon the rocks the by Sirens and bewitched by the sorceress Circe? Memories of his wife, Penelope, and their son, Telemachus, a newborn when he left the island.
Ever-faithful and possessing the patience of Job, Penelope is in the background of the story - in some ways, she is the whole background of the narrative. Holding down the fort - or palace, as it were - she spends her days weaving and her nights fighting off the ever-emboldened suitors who have come from islands all around to seek her hand in marriage and take her presumed deceased husband's place.
But Penelope never loses faith. Convinced her husband is still alive, she concocts a plan to keep the suitors at bay. She tells them that once the garment she is weaving is finished, she will choose a suitor to marry. Unbeknownst to them, what she weaves by day, she secretly pulls apart at night, only to begin weaving all over again the next day. This works for a while, until the suitors become increasingly restless and demand for her to finish the work. She conspires with her son, Telemachus, to hold off the suitors until Odysseus returns to Ithaka, disguised as a beggar.  As the climax is pretty exciting, I won't spoil the ending for anyone who hasn't read it, but suffice it to say that she is really happy to see her husband show up after 20 years.
We learn very little about this character except that she has plenty of it: character - in the form of resolve, patience, and a certain amount of something that may have rubbed off from her husband - cunning. But her traditional role in the epic speaks volumes about the perception of women in antiquity.
Margaret Atwood has written a book from the point of view of Penelope, entitled, befittingly, The Penelopiad, the title a take off on Homer's other epic poem, The Iliad. With women in the background of many of these ancient classics, it's refreshing and humorous to consider how events might have been perceived through the eyes of women instead of men. Another book, Goddesses, Whores, Wives and Slaves, by Sarah Pomeroy, sheds further light on the role of women in antiquity through the lens of modern feminism.

In all the time I spent excavating on Ithaka while we searched for the palace of Odysseus, the most exciting finds were not necessarily the 29 silver Corinthian coins we found in one trench, or the foundation of a Hellenistic tower. It was the loom weights we unearthed every few weeks or so: small triangles of clay with holes drilled in them, small enough to fit in my palm. Every time I held one I thought of this stoic woman, waiting year after year on this remote island for her husband, always believing he would return to her some day — and wondered if it could have once been in Penelope's hand;  she slipping through the woolen skeins and readying the fabric to be pulled apart, waiting for the moment when the sun would slip over the distant edge of Homer's wine dark sea.
Email Post
Labels: Divine Feminine goddesses Greece Ithaka Penelope