Goddesses in the Dirt - Women of the Ivory Coast

Unearthing the Divine Feminine, one archetype at a time........ 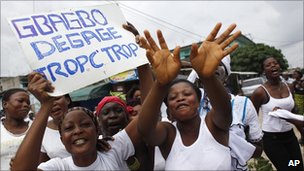 Issue #5:  Women of the Ivory Coast


I had originally planned another subject for this issue of Goddesses in the Dirt, but after hearing about the massacre of women in the Ivory Coast, I changed my mind. I'm usually not a very political person, but when I read about a group of peaceful women protestors being gunned down by armed vehicles, call me political.  I once read somewhere that if an American gets killed abroad, it makes the front page. If someone from another country, in Africa, say or Southeast Asia gets killed, you'll find it buried deep in the back, somewhere near the weather report.


When the story first broke late last week, this article was buried deep in my local paper: 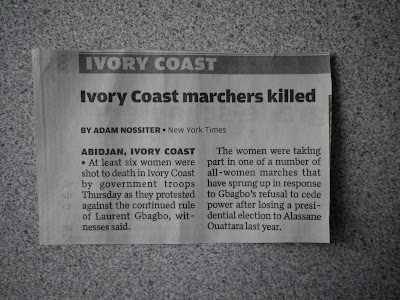 It hasn't received much more attention in the press since.


The women in question were marching peacefully, smiling and chanting slogans, protesting the current government, calling for the ouster of self-proclaimed president Laurent Gbagbo, referring to him as a "robber of power."


Suddenly, three armored vehicles pulled up, and without any warning, opened fired on the crowd, leaving by some reports, seven dead, including a child, but the death toll could rise. Hundreds were injured. One woman was possibly decapitated, another was videotaped trying to raise her head from the pavement but gave up, lowering her head to the ground.


It seems many are rising up to protest their current government, or lack thereof, around the world. Egypt, Tunisia, Libya, and now the Ivory Coast. This group consisted primarily of women: women asking for change from a corrupt regime and getting caught in the middle of what seems to be a country escalating towards civil war.


When the crowd scattered to escape the gunfire, they left behind a pavement littered with flip-flops and purses. 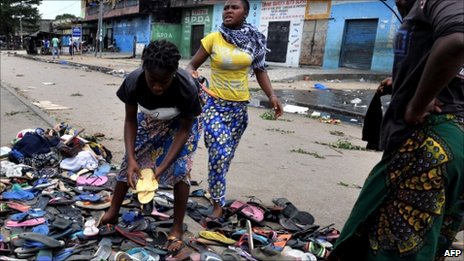 Why is it that so many have to die in order for their voices to be heard?


But let there be no mistake: their voices do not die.

They live on, as through this young girl, singing at a protest march in Tunisia. Her words are haunting yet they evoke the spirit of millions, including those who lost their lives in this senseless massacre