Goddesses in the Dirt - The Snakes of Kefalonia 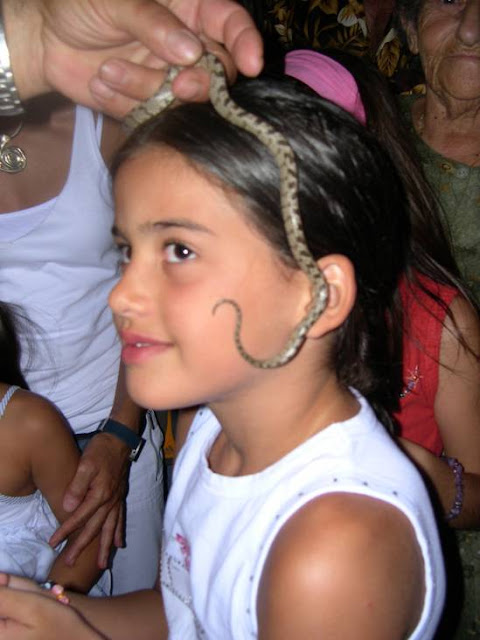 Issue #4: Snakes of Kefalonia
Some years ago, I read about a mysterious ceremony that took place on a Greek island at the height of summer. August 15th marks the feast of the Assumption of the Virgin Mary, and it is usually observed with a celebration involving lots of wine and roast lamb - particularly welcome after a two week meat fast. But the celebration on this Ionian island included something a little out of the ordinary, beyond the typical music and dancing late into the night.
This celebration involved snakes.
What do snakes and the Virgin Mary have in common, you might ask?
Most people erroneously associate snakes with evil and the downfall of humanity, as in the story of Adam and Eve, or think of it as a phallic symbol. But snakes are inherently a symbol of the female. They are of the earth - Gaia, another female archetype - and are also connected to the concept of Kundalini Shakti energy; a feminine force that resides, coiled, at the base of the spine, waiting to ignite a spiritual awakening.
Snakes were a part of the ancient temples of Asklepios, the god of healing, where the afflicted came to spend the night and await healing through a dream. Today the snake is part of the symbol of modern medicine, entwined around the caduceus. This image has apparent roots in Mesopotamia, representing lovers of the goddess Ishtar.

The oracles of Delphi were referred to as pythias, which is derived from the original Python, who guarded the entrance to the cave of the oracle and was slain by the god Apollo. The serpent archetype has been associated with women since Minoan times, as in this statuette of the snake goddess. 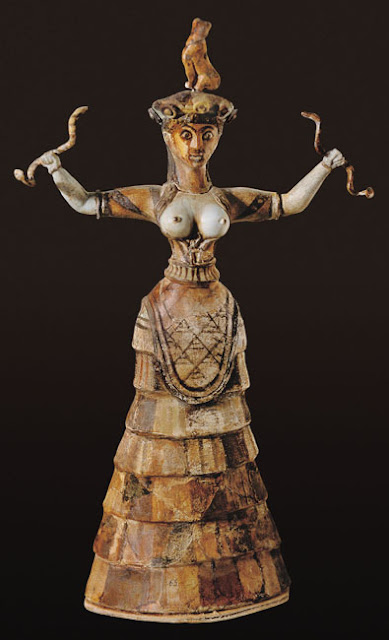 For some reason, snakes and the Virgin Mary converge at this church in the tiny mountain village of Markopoulo. Decades ago, locals noticed that hundreds of tiny snakes emerged from the earth around August 15th, the date sacred to the Virgin in the Orthodox calendar. People coming to witness this strange event noticed a connection between handling them and  healing from illness. Soon pilgrims from far away began flocking to the little church for the mid-August date, and today it is a full blown event.
Three years ago I visited the island with my daughter to research the ceremony. We drove up a winding mountain road in the dark to arrive in time for the evening service. Tiny white lights were strung across the plaza outside the church giving the village a festive feeling. 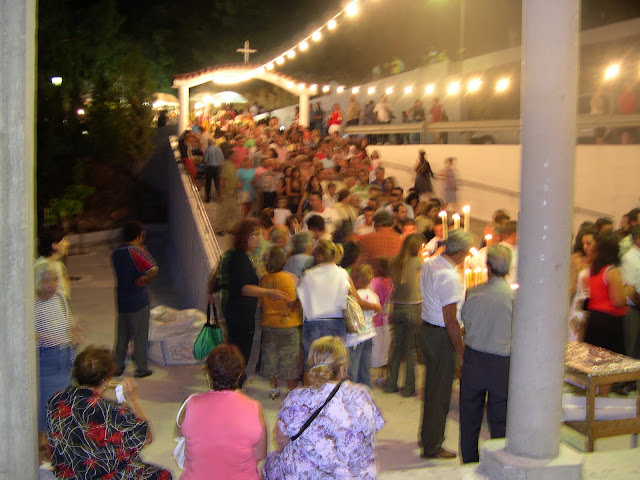 Throngs of parishoners waited patiently to be let in, buying oversized white candles to dedicate in the sacristy. 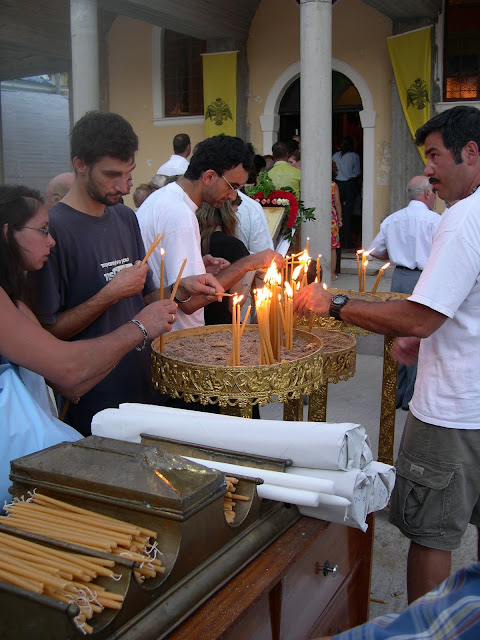 The church was guarded by these policewoman. This was typically Greek, as a male companion said to me, "they always put the pretty ones out in front." The Divine Feminine at work in a creative way. 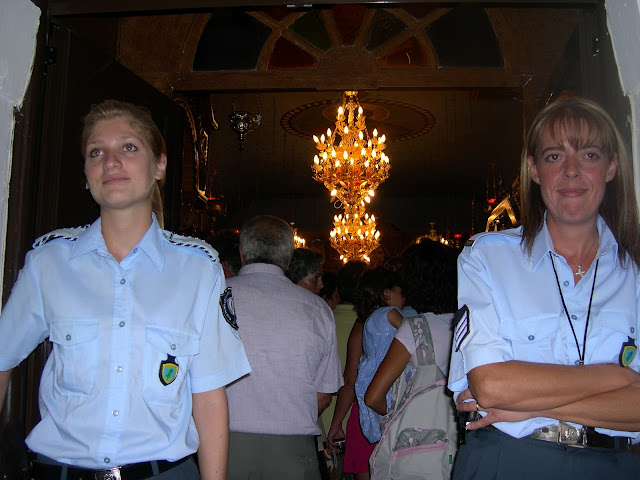 Inside, the Bishop handled the tiny snakes while conducting the service. 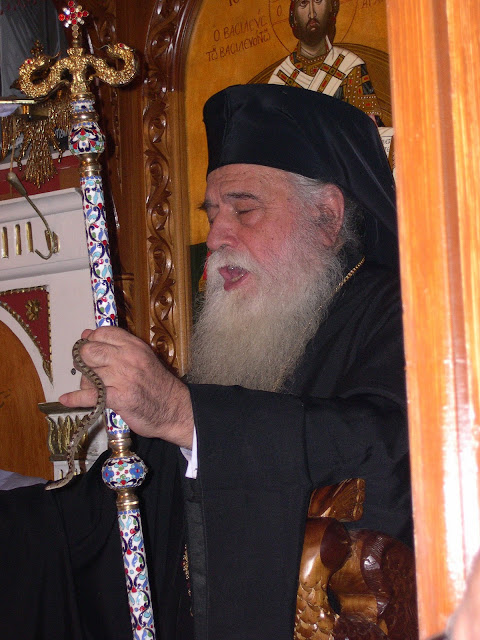 Parishoners filed solemnly past this portrait of the Virgin and Child with snakes, which had been decorated with flowers. 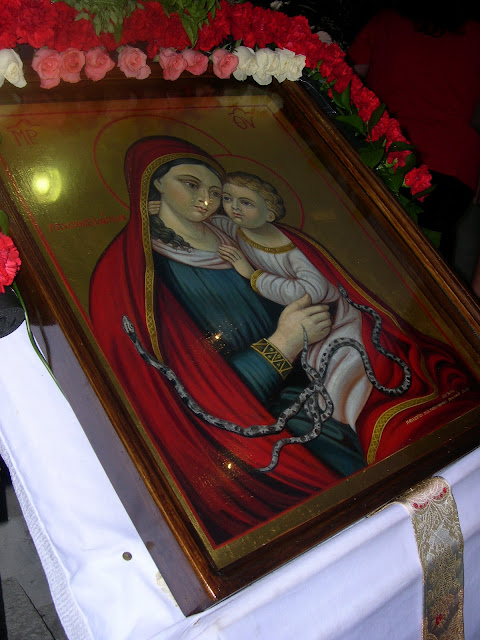 Outside the church, huge crowds gathered around the snake handlers, hoping to touch the creatures themselves, 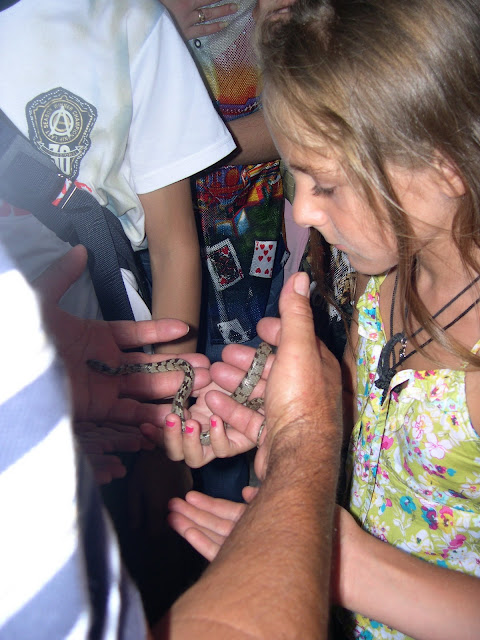 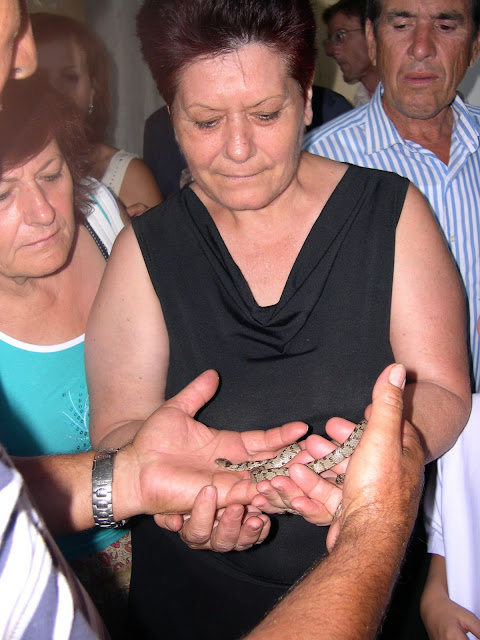 or place them on their childrens' heads to ask for healing.

Local legend states that the snakes have appeared annually except in 1953, the year a catastrophic earthquake struck the Ionian island chain, leveling entire villages and killing thousands (the earthquake is immortalized in the novel Captain Corelli's Mandolin, by Louis de Berniers, which takes place on Kefalonia.)
I used to be afraid of snakes, but when I learned of their connection to the Mother Goddess, I have developed a respect for this creature. A few months ago, I found a garden snake in our basement. I gently moved her to a hollowed out tree stump in the backyard where I had previously seen snakes. When I laid her down, she moved part way into the hollow, then stopped to turn her head toward me and flicked her forked tongue before disappearing into the earth. I'd like to think this little emissary of the Divine Feminine was acknowledging her appreciation.
Photos of snake goddess and caduceus courtesy of Google images
Email Post
Labels: archaeology goddesses Greece mystery snakes