Goddesses in the Dirt 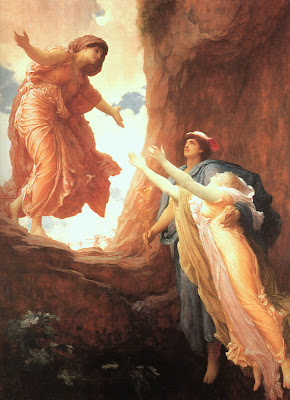 A young woman wanders the fields, picking flowers, unaware that her life is about to change forever. Bending to grasp a handful of blossoms, she suddenly hears the thunder of hooves. Before her, the earth splits into a crevasse from which a chariot erupts, driven by a shadowy figure. Before she can run, she feels his grip around her waist. She calls out to her mother, but it is too late: the flowers drop to the ground, she sees the sky spinning above and the light dimming......slowly at first, then with rapidly increasing speed, the chariot dives back down into the abyss. The light grows more distant the deeper they go, eventually disappearing altogether as the earth swallows her whole.
MOST PEOPLE ASSOCIATE PERSEPHONE, the tale of a maiden goddess, with her mother, Demeter, the goddess of agriculture. While out picking flowers, Persephone wanders away from her mother and is abducted by the god of the Underworld, Hades. Distraught over the loss of her daughter, Demeter wanders the earth above, and vows to not let anything grow until she is returned to her. Eventually Zeus convinces Hades to let Persephone return to her mother, but not before Hades offers Persephone three pomegranate seeds - the food of the dead. Upon reuniting with her mother, Demeter is overjoyed to see her daughter once again, but when she finds her daughter has eaten the seeds, her heart sinks - she knows Persephone must return to the Underworld. A compromise is reached; Persephone must return to Hades to live for 3 months of the year - one for each pomegranate seed - and during this time, which we recognize as winter, Demeter mourns her daughter, and nothing on earth grows.
There exist multiple variations on the number of seeds Persephone eats: 3, 4 or 6 - but all signify the season when growing things go dormant and the earth rests as it awaits renewal. The version of the story I like recounts how Persephone becomes accustomed to her life during those months spent with Hades, becoming Queen of the Underworld. It is in this capacity that she has transformed from a passive, helpless goddess to an active force responsible for helping mortals make important life transitions; specifically the ultimate one between the life and death states, becoming a true 'seer' or one who can see in the dark. 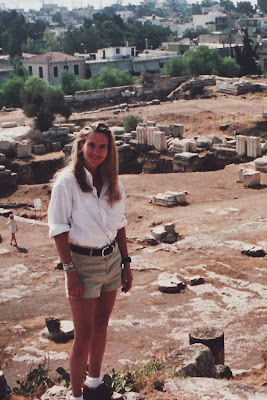 This is Eleusis, the sanctuary dedicated to the goddesses Demeter and Persephone. It is named after the Eleusinian Mysteries, an annual rite that was performed in their honor and one of the world's most famous mystery cults. In antiquity the area was a sacred grove, located on the Saronic Gulf, not far from Athens. Sadly, today the site is surrounded by oil refineries and the encroaching buildings of the modern town. However, if you ever have a chance to visit this sacred site, go find a quiet corner to sit, close your eyes, and you will be transported back in time. It won't be difficult to imagine a magnificent temple and torches blazing in the night sky as initiates reenacted Demeter's search for her daughter in a powerful ritual.
My connection to Persephone seems fated: as a child, I experienced a series of nightmares in which I was pulled through a hole in the earth; many years later, a revelation in an Athenian restaurant basement led me on the path to my career as an archaeologist. In recent years, I have pursued my interest in the archetype of the Divine Feminine, which Persephone represents, and seek to expand awareness of this  powerful, often misunderstood, and desperately needed force to restore balance in our world.
I will write about the Eleusinian mysteries in a future issue of Goddesses in the Dirt.....but for now, Eleusis is as close to the real Underworld of Persephone one can get.
Image: The Return of Persephone, Frederic Leighton, 1891
Email Post
Labels: archaeology archetypes Divine Feminine goddesses Greece Persephone