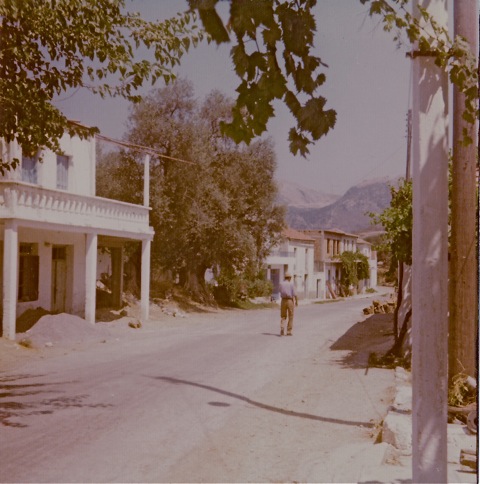 It’s late in the day when I arrive, and I am feeling lost. Not just physically lost, but mentally and emotionally beaten. I am supposed to be a big, strong, American girl coming to Greece and having my “year as a broad” experience, impressing all those at home with my bravery and language skills. Right now all I feel is weak, puny and a complete failure. Like Odysseus, I am facing my own Scylla and Charibdes in this foreign place, and I am afraid that I will not pass some unseen test.
The bus lets me off in the tiny village of Mixorrouma in the mountains of central Crete; I am told that my family lives there, behind this small kafeneion. I drop my bag on the concrete curb, pull a chair into the shade and lean against the wall of the building. It is August and the heaviness of a Greek summer afternoon descends; dust spools behind a passing car and I hear a donkey rustle in the bushes across the street, a snake slithers out into the afternoon light. About two hours go by when a woman in a faded housedress pokes her head out of the door and asks if I am A-man-tah. When I answer yes, she responds by dragging my suitcase through the door. I follow her into the kafeneion, through a rustic kitchen dominated by a fireplace, table and chairs and something I hereafter will covet in my own kitchen: a couch. A large cast iron pot hangs from a hook over the hearth; swinging over the table is a cage, holding some leftover food I can’t identify - flies cluster around it, hanging lethargically in the afternoon heat.
She leads me across an outdoor breezeway to a room. In the corner is a bed, a thin mattress slopes towards the center of the frame, forcing it into a ‘V’ shape. I sit on it gingerly, examining the space. Piles of boxes line the perimeter; it is clear I am to sleep in the storage room. Chrysoula, as she has introduced herself, gives me a half-smile and leaves me, pulling the glass door shut behind her. Although I realize she is trying to allow me some privacy, I imagine for a moment that I am to stay in the room for the balance of my visit: a month.  I contemplate the humor of it as I gaze out the glass door at the outhouse, which Chrysoula pointed out on the way from the kitchen.
Some days I am left alone, and if it weren’t for the fact I was supposed to be learning Greek, I would have wandered off into the wilderness until the end of August. Being around people with whom I cannot communicate except for hand signals and vocalizations that usually elicit laughter and derision generally makes me nervous. One day, however, my little sisters and brother have decided they know me well enough to start treating me the way they do each other – cruelly - and use me as a target in their latest game.