geography of a wrist 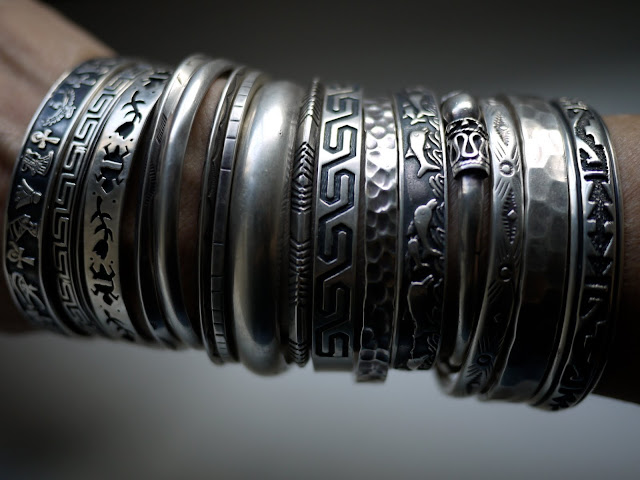 growing up, we all have memories of our mothers through sight, sound, and smell. my mom smelled of chanel number 5, had hair so black it shone blue, but my biggest memory is auditory. her right arm was covered in tiny silver bracelets she collected over the years, and when i was little, i fell asleep to the sound of metal jangling around her wrist, as she read the owl and the pussycat to me for the umpteenth time.
when she died, 18 years ago last month, her bracelets were split among her children. about 12 years ago, i decided to start wearing some of them, 4 to be exact. they were small, thin cuffs she got out west many years ago.
about that same time my husband and i started traveling with our kids. we figured, instead of buying things like a bigger house or newer cars (who needs those?!?), we'd rather put on some backpacks and take our kids when they are young to see the world. so everywhere we went, i purchased a silver cuff to remind me of that country and that trip. we started off in northern thailand where i found a distinctive filagreed design in the golden triangle, and then over the border to burma found another at a street market that sold plastic kalashnikovs (my then 7 year old son was in heaven). next stop, spain, where we marveled at gaudi's architecture in barcelona, drove through the snow to reach the fortressed town of avila and rang in the new year in cadaques on the northeastern coast, where the kids tossed rocks into the cold, choppy water while my husband and I toasted each other with cava (spanish champagne) on the beach. i looked in vain across ireland, and never found the right one, but we listened to the haunted wind blow off the atlantic and looked for leprechauns in the bogs of county offaly. a few years later i found the perfect strip of hammered silver on ithaka, reminding me of how the water reflects the greek july sky.....
then there was turkey, where we sailed along the coast in a little wooden boat. sleeping above decks, watching the moon arc over us as we floated somewhere in the mediterranean. in istanbul we visited the spice market and after searching through dozens of jewelry stores i found a slim band engraved with dolphins leaping through a ribbon of stylized waves. and in teotihuachan, a bold precolombian design called to me from a tented market one sizzling afternoon outside the pyramid of the moon.
18 months ago we visited egypt. we climbed into the king's chamber and meditated, rode the train along the nile and joined a midnight military escort across the desert to reach abu simbel by dawn before the thermometer hit the roof. in aswan i found two lovely bracelets --- made of nubian silver, the vendor promised me. it sounded exotic enough, so i purchased them. they like to reside at the bottom of the heap, around my wrist. one has a greek key pattern, which i have searched for in vain in greece.....i've only ever seen them made of gold. i'm not a gold person.
this july, when we were in montana, i received two more bracelets, for my birthday. one was from my husband - a bold navajo pattern - and the other from my sister, a lacy indian silver band with roses and crawling turtles.
so far there are 16 in all. how many more i can stand before i sink when i go swimming i don't know. people often ask if i take them off at night, but i never remove them - only for massages, airport security. or surgery........and god forbid that doesn't happen often. they jockey for position and i often wake up with a messy heap of metal, which i have to patiently disentangle.
so my kids have grown up listening to the sound of metal jangling as well, whenever goodnight moon, the runaway bunny or grandfather twilight was read and prayers said. i guess i have become a totem - whenever i'm at a family reunion, people are drawn to my wrist, and i'll give it shake for all to hear. like a shaman with a rattle, maybe, somehow, we'll invoke my mother's spirit.
anyway, mom, please know as i write this, with bracelets hitting the desk, scraping against the laptop and making that unmistakable jingle........
i'm thinking of you.
xo♡a
Email Post
Labels: bracelets children family mother silver travel