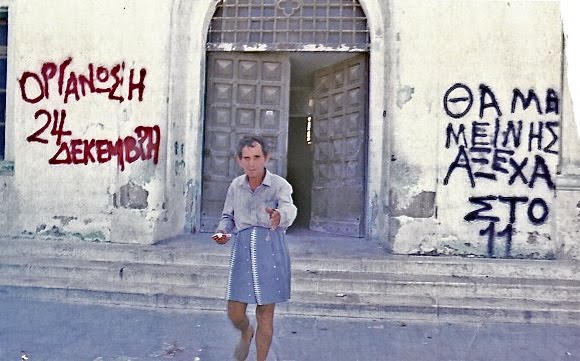 I looked at my watch and checked the time: 3 a.m. Standing on the deck of a ferryboat in the middle of the Aegean Sea, I shivered, not only from the chilly night air, but in trepidation, as I watched the lights of a distant shoreline draw closer. I was about to arrive at a place that, until recently, people didn't come to volitionally --- they were sent here. Since the Greek government opened a psychiatric hospital on this remote island decades ago, Leros has primarily been a destination for the insane.

The song, Crazy, by the singer Seal, cued up on my headphones, and I laughed at the coincidence, secretly questioning my own sanity in coming here. Since I began working as an archaeologist in Greece some twenty years ago, I had heard many horror stories about this notorious island gulag: over the decades, the psychiatric hospital had become not only a residence for the mentally ill, but a depository for all of society's castoffs and undesirables. Considering the island's reputation, it seemed fitting that the ferry, headed towards its last stop from the mainland, was arriving in the middle of the night.


A little known story from Greek mythology had also lured me to this foreboding place: Leros was the ancient birthplace of Artemis, goddess of the moon. Anyone with a little Latin under her belt could tell you that moon is the root of the word lunatic, so I asked myself - could this be a complete fluke? Another of Artemis' distinctions was as the guardian of animals. My pet Airedale, Mia, was scheduled for surgery back home in a few weeks, and I had brought a photo of her along. Since I was visiting the temple anyway, I figured it wouldn't hurt to ask for some divine protection.

The ferry docked and I crowded into one of three taxis waiting on the darkened pier. After a harrowing ride through narrow streets and winding alleyways, we arrived in front of a small pension near the top of a hill. Clearly, Artemis had been spinning some madness of her own; the building's terrace, suspended directly over the sea, was drenched in the light of a full moon. My driver laughed at my question as to whether the island was crowded.

"Any tourists have left," he called out the window as he pulled away. "You've got this place to yourself. Peace and quiet."

Leros' sordid history as a penitentiary started during World War II, when Mussolini opened a military prison on the island, which is located at Greece's eastern boundary, within spitting distance of the Turkish coast. The facility became a psychiatric hospital in the years following the Italian occupation, and throughout subsequent decades it fell into disarray, over time morphing into the iconic archetype of an insane asylum, where all of society's rejects, mentally ill and dispossessed were abandoned.

Curious to explore this modern-day gulag, I set out the first day in a tinny rental car. Unlike the typically stark, whitewashed islands portrayed in Greek post cards, Leros is scrubbily wooded, with rolling hills and deeply recessed bays that explain its frequent misrepresentation as an island of lakes. Driving along deserted roads lined with overgrown rosemary bushes the size of washing machines, it soon became clear that Leros' most enticing feature was its delayed development, thanks to decades of near-avoidance by tourists. Perhaps it was the heat of the afternoon, but some villages seemed empty, save for the occasional widow in black. On one stretch of road, leading towards the village of Blefouti, the only car I passed for miles was a battered pick-up carrying a load of watermelons.

In the village of Pantelis one morning, some locals expressed ambivalence about the spectre of encroaching tourism. While dining at a taverna under the shadow of an 11th century crusader castle, I pulled out an old article with photographs of the hospital.

"Another tourist here to gawk at the asylum," grumbled a voice at a nearby table. A large clique of men sat across from me, sharing an early lunch; some of them were leaning back in their chairs, worry beads expertly clicking through their smoke-stained fingers. After an awkward silence the men, more interested than angry, hobbled over to my table.

"I knew Mr. Cigarette," one of them offered politely, pointing to a photograph of a male inmate in a skirt, gesturing towards the camera with his hand held out. "It's true, all he would ever say way, 'give me a cigarette, one cigarette, please!'"

The men crowded around, leaning over my shoulder and flipping through the photos, pointing out inmates they recognized and recalling the old days of the asylum. Their conversation grew louder and attracted the attention of a man who had been sitting nearby. Introducing himself as Chris, he told me he recognized the images as well and pulled up a chair to sit across from me.

"I worked at the hospital in the early 90s," he said, watching as the men straggled back to their table, the photos still being passed from hand to hand.

"Conditions were horrible -- it smelled awful - feces everywhere. No toilets. The locals who worked there didn't know any better for lack of education. They weren't trying to be cruel, they were just plain ignorant. Workers dusted off chairs that inmates had sat on before sitting down because they felt they might catch their disease and become crazy themselves."

We were interrupted by the sound of laughter; just beyond the taverna, a group of mothers splashed in the transparent water with their children -- in the distance three sailboats tilted in perfect unison.

I'd heard that the island's reputation was so deeply imbedded in the Greek psyche that mothers were known to caution misbehaving children by threatening them to be sent here -- and even the word lera meant filth. Chris nodded in agreement, adding ominously,

"Even tourists are sent here sometimes. Anyone who flips out on holiday is arrested by the police and jailed here. One Dutch guy on Rhodes was kept for six months."

After lunch, I set out in search of the hospital. The main road passed by houses with arched doorways and engaged columns profiled against pastel hues, a nod to the island's Italian occupation during World War II. In the small village of Aghia Marina, a fisherman sat on the wharf, mending his nets in the suffused light. Tracing the road south, a white structure came into view, looming in the distance and hidden amidst a grove of spindly pines. I parked the car in the gravel and walked towards the entrance; a uniformed man leaned back on his chair in a guard booth, half-heartedly glancing up once in a while at the nondescript stucco building.

In 1989 the BBC came to film the asylum and its inmates, chronicling their daily lives. The resulting documentary, exposing horrendous conditions, set off an international spate of news coverage, denouncing the hospital and the disgraceful state of mental healthcare in Greece. Since the documentary aired, large-scale improvements were put into place. A nursing school was opened on the island and the hospital had become a model of reform. Yet recently I'd heard that fewer new patients were being sent here, and the asylum was eventually scheduled to close.

Walking up to a ridge ringed in razor wire I looked down over a compound of tidy, Eucalyptus-shaded patient housing. After a few minutes, an elderly inmate suddenly appeared in the door; he shuffled, barefoot, onto the cracked concrete courtyard and stooped down, throwing scraps of food to eager cats that congregated around the doorway. In the distance I tried to locate the infamous Ward 11, the now-empty site of the asylum's most obscene cases of neglect. Photos I had seen of this hell-hole hovered in my consciousness - images of faces, begging hands and emaciated inmates curled on bare concrete floors.

Making my way back to the entrance, I looked through the chain link fence into the dusty courtyard. Except for the old man and his cats, the asylum already seemed deserted. I thought for a moment about going inside, but as I approached the guardhouse, I noticed two people getting out of their car. From their dress and accents it was clear they were tourists. Walking up to the gate ahead of me, they removed a camera from their bag and began pointing and snapping photos.

I was suddenly overcome with shame. What was I doing here? I should be on the beach, knocking back ouzo at a taverna or riding a jet-ski like any self-respecting tourist. Anything besides standing outside an insane asylum. Yet this place had drawn me, like the full moon that smothered my balcony at night. I had just needed to see it for myself, to see if it had changed, but maybe the old men were right after all: I was just another tourist, here to gawk. The asylum was now almost empty of patients, but the truth became painfully evident: there were ghosts on the premises and I was trespassing on sacred ground. Slowly, I walked back to my car and pulled out onto the road, watching until the chipped and graffitied structure disappeared like a mirage from my rear view mirror.

That evening I joined Panagos, my host, on the pension's terrace for a glass of wine. Telling him about my day, I admitted my ambivalence about visiting the asylum, and wondered what he saw in the island's future.

"I worked at the hospital for almost thirty years," he said, his face reflecting pain as he spoke. "But I needed to do something different, something new," he went on, "to support my family. That's when I decided to open up a hotel."

Even though he had seen many decades of darkness on his native island, his optimism for a better future was clear. "The other islands have been built up, like Rhodes and Kos," he said, filling my wineglass and leaving me with a final thought, "but Leros hasn't been spoiled."

The restaurant had attracted a crowd by then, with all tables full. I ordered the evening's specialty - lamb, slow roasted overnight and served in a lemon sauce - and toasted the moon, rising like a bruised peach over the coastline of Asia.

With the moon goddess on my mind, I saved a visit to Artemis' temple for my last day. Parking my car in an olive grove, I forced open a rusted gate and waded through a field of pink lilies on my way up to the ancient remains. Just a single row of foundation stones remained on the plateau, affording views of the sea in the distance.

I never found a link between the goddess and the asylum, but my instincts told me there was something more to this eerie connection, just waiting to be uncovered. In the mean time, the absence of sightseers that afternoon provided a rare treat for an archaeologist: in all my years of excavating, I'd never had a Greek temple to myself. Taking a photo of Mia from my pocket, I found a chink between the stones and wedged it in securely. As I held an image of her in my mind, I found my thoughts drifting to Mr. Cigarette, and the other inhabitants of this haunted soil.

Silently, I offered up a prayer.