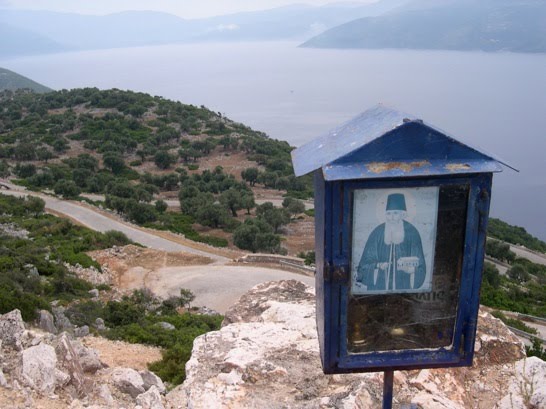 just like anywhere, Greeks love their roadside shrines. you'll find them on every hairpin turn where your car has to eek around corners hovering 300 feet above the wine dark sea. oh yeah. that's the worst, when your heart's in your mouth and you just know the car's going over the edge any moment now.
i finally got these roads figured out on old Ithaka, though. after so many years of driving up the one main road between the north and south of the island. i just don't like doing it at night is all.

in the old days the roads weren't paved yet (God this makes me sound ANCIENT like the stuff I dig up over here). so we almost popped many a tire trying to drive over boulders while hugging the inside edge of the road. sometimes drivers (like me, for example) would have to change places. i'd lose my nerve.
there's a good reason these shrines are there. lots of young men on Ithaka love to ride motorcycles the way all young men around the world like to: fast. any every year someone goes over the edge. sometimes they walk away battered and bruised like my friend Thymios, and sometimes they die. when this happens, the whole island mourns. for years.
one of my last trips to the island,  i stopped and got out to take a closer look at one of these little roadside boxes. from a distance they appear to look like any old religious shrine but on closer inspection you get a bit of an odd look at Greek society.
inside was an icon of the local patron saint Gerasimos with eyes downward cast. a couple of squat candles melted to the nub in little splats and a little bottle of olive oil, presumably to light them with. off in the corner i noticed a couple other things: a pack of Karelia Lights (my old favorite brand of Greek cigarettes) and a tiny bottle of ouzo.
i guess the moral of the story is, if you don't go over the edge and land in the Ionian in a heap of metal, then you can send up a quickie prayer to Saint Gerasimos.
and have a cigarette and a shot of ouzo while you're at it.
xo♡a
Email Post
Labels: cigarettes Greece Ithaka ouzo patron saint roadside shrine