we got things from mexico 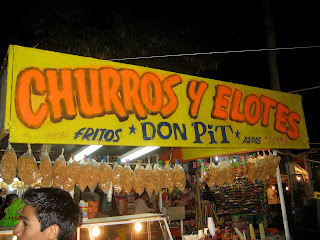 God I love churros. And I've been eating them nightly.

I just got back from the little town of San Jose del Cabo at the tip of the Baja in Mexico. While we were there a fair was going on - or a 'fairy' as our friend, Maria, called it. As I walked through the streets in search of a churro stand, past vendors selling hot pink pistachios, embroidered wedding blouses and bouquets of Sponge Bob balloons, this rhyme kept going through my head from a commercial that airs at home on late night TV. It starts with a bulldog sitting splay legged with a sombrero on its head. Then the scene cuts to the biggest pile of kitsch you've ever seen - clay pots, colored gourds, frog headed planters, velvet landscapes of jagged Mexican mountains and all throughout the ad a song keeps playing over and over, "Gringo Jones and me, we got things from MexiCO-OHOHHH." 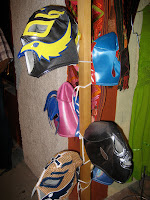 After a few nights visiting the 'fairy' I think Gringo Jones might want to look into this place: Nacho Libre wrestling masks are much cooler than frog pots and velvet murals. The fairy was pretty cool, too, and it seemed half the town was in attendance. Underneath the yellow lights strung across the plaza kids played a weird form of Twister, contorting their bodies on a cheap plastic mat stretched across the street. Young women wearing tight pants and heels primped for the local boys and a rock concert blared on stage just outside the local cathedral. We snuck inside for a bit and settled in on a pew, the smell of tamales wafting in and mixing with the incense. A man stood on the altar, softly strumming a guitar. Outside the church doors a carnival ride whirled through the night air in a psychotic neon blur of blue, orange and yellow. 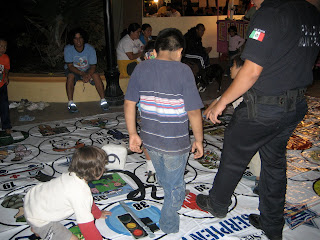 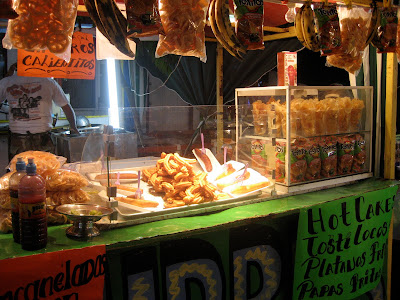 But it's all about the churros down here, baby. I finally located a stand selling the hot, twisted sticks of dough deep fried in last night's taco oil. The vendor takes your money and hands over the golden treat with the same plastic gloved hand. So much for hygiene. But who cares? It's sooooooooo good. And maybe next time I visit I will get up enough courage to dip it in evaporated milk. Mexican style.
In fact, the only thing I wanted at the fairy more than a churro was a churro machine. Maybe I'll check and see if Gringo Jones can import one.
Email Post
Labels: churros gringo jones mexico