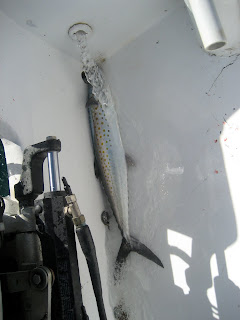 We drove to the marina where dusty puppies lay in the hot sun and pelicans were roosting on boats in antediluvian clumps. It took a while to locate Captain Jaime, who ended up not being our captain but passing us off to Angel, the fisherman who would take us out to the Sea of Cortez.

Before we pushed off for a possible 6 hours, I had to pee. Jaime said there was a toilet on the boat, but when we showed up it turned out to be a small hatch beneath a Coleman cooler. I couldn't see myself going down a hole to do my business, so the kids and I dashed off to the closest restroom before pushing off.

Angel threw the engine switch, the boat lurched forward and we buzzed out of the marina in search of fish. Tuna, the fisherman on the wharf had promised, and sea bass. Passing the harbor entrance, Angel opened the throttle and we roared out over open water; almost immediately we found ourselves being chased by a small motorboat. First thought - oh my God we are being hit up by pirates - drug smugglers, whatever. But they were just the bait guys. A $20 bill passed hands over the side of the boat and we got a hull full of sardines flopping flipping. Angel hand shoveled the mess into the hold stinky slippery and all.

Now to find the perfect fishing spot. How about that cape with the gray elephant rocks and curving turquoise water smashing angrily onto the beach? Yes, this is where the Sierra hide, I was to find. I was the first to pull one up. Heavy, heavy on the line and then yank! Pull up pull up!!!!

The line wavered around slicing the water like a surgeon's knife and bang! Up came a silver fish  swinging its tail madly, teeth baring, a glint of rainbow along its back. Sierra, Angel said. Good to eat. He held it above the engine, the fish ripping mad, fighting for its life. Grasping it in one filthy hand, he used a pliers in the other to cut the line from a row of razor teeth. Yay!! I caught one.  Now let someone else give it a go.

We glided along the coast and then hovered near a group of other boats, fishing rods sprouting up from their decks like feelers on a giant insect, plying the waters. Angel waved at another captain and Spanish was exchanged, skimming along the water between us. Son caught the next fish, a bigger Sierra. It got tossed in the hold and the two fish pulsed in a muscular heap.

My husband was next - his Sierra was the biggest yet. Soon we had a hull full of silver, turquoise fins and rainbow ridges, smacking the deck. My daughter still had not found a fish. We can't return to land until she does, I thought to myself, hoping that she would come up with something, anything at all. Soon she did - the tiniest of triggerfish was hoisted up - a fat yellow disc. We all applauded but the trigger must go back in the ocean, Angel warned. No eat small fish, he said, only big.

A long time passed and I could see my daughter moving her pole about, starting to turn the reel. Faster and faster it clattered with an alarming rattle. What did it remind me of? A crazed seamstress on her sewing machine? A toy helicopter veering dangerously off course?

Angel was excited - he leaned over the boat to grab her line. Si, si, mucho gusto, he said and with a yank a round form appeared, the size and width of a small pillow. This time it had reddish stripes along the side. 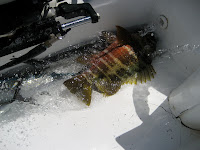 We returned to the marina where a group of men and two dogs awaited. One paddled ceaselessly around the boat, tongue out. He looked like an English pointer. But all the dogs here are mutts - I've seen Mexicans aim for them when they are driving. A pelican almost landed on the back of the boat where the fish were; my son swatted at it with his arm and it deflected off the boat, hitting the water in a flustered heap.

A man with a wheelbarrow scooped up the fish and took the whole mess to the cleaning hall. It was an open air affair with four workstations; about 15 men were standing around watching two men do the work. The fish lay at one end of a huge sink with gently sloping sides. The man worked a showerhead, dangling like an old fashioned telephone off the hook, and sprayed down the catch. Grasping a buoy knife, he turned and pointed it towards me.

You want skin or no?

What's the difference, I asked.

So skin on it was. 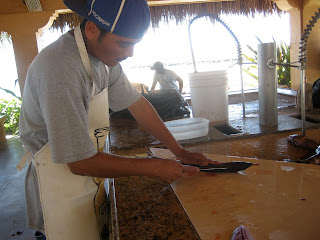 He grabbed a Sierra with his left hand and steadied it on the red granite surface. He made a cut under the head diagonally and then laying the knife flat, slid the blade along the spine in one fluid motion. Flipping the fish over, he repeated the motion and with a dismissive fling he tossed the head, tail and spine into a chum bucket positioned at the end of the workstation. Blood ran down the slanting sink into the drain. A tan, half-Boxer mutt paced anxiously a few yards away, his nose in the air. The showerhead nozzle was worked, the red granite surface washed down and the process began again with seven more Sierras. They saved the best for last. While the rest of the gleaming catch was worked on, my daughter's red snapper was positioned, for the moment, like the oddest centerpiece ever: fat, shiny red stripes, fin wagging, eye rolling at the center of the platform for all to see. Soon it joined the rest of the catch. The man with the buoy knife scooped up the filets and in one deft move dropped them into a black trash bag, knotted them shut and handed them over. Heading back across the parking lot, we wondered how the fish was going to last in a hot car for the long drive across the desert en route to the fridge.
Email Post
Labels: fishing Sea of Cortez