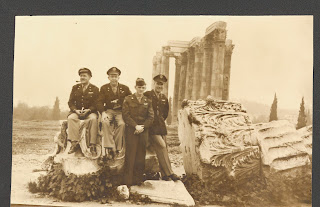 I was so happy to find this picture. I thought I'd lost it. Several years ago, after my mom's death, my dad gave me a bunch of old photo albums and this was in there along with a bunch of wonderful shots. I’ve always loved looking through our family albums when I was growing up, so it’s only natural I’d want to do the same thing now as an adult. That’s how I came to be designated as the Family Archivist.

Last year when I was out visiting my brother in California, he handed over the family slide collection. How he did this, I don’t know, but he managed to cram approximately 30 carousel trays of ancient slides into two huge rollerboard suitcases so we could take them home on the return flight. Which we would have done, except for the fact that they each weighed about 3000 pounds. Thank God for Fedex. Still, I was amazed at the dexterity it must have taken to take each of these trays, bits of plastic chipping off, filled with yellowed slides, stack them in each side of the suitcase and then somehow manage to shut them like a gigantic clamshell without all the contents cascading out like confetti at a St. Patrick’s day parade.

So before I became the Keeper of the Family Slides, I was merely the Archivist of Family Photos. This new upgrade in my status makes me nervous. I don’t think I’m up to the task. Because the Family Slides have taken up residence under the piano in the living room. Every day I pass by and it’s gotten to where I don’t really see them. Sitting under there. Like two enormous Pacific clamshells, waiting for the tide to come in. On occasion I move a large piece of pottery in front of them, like when guests come. Pay no attention to those suitcases under the piano! The Family Slides are just getting ready to go on a trip. To the basement.

That’s where I had planned to set up my amazing, photo archiving headquarters. It was going to be great – a table in the corner with a comfy chair, bright lamp so I could cut and paste and create lovely, keepsakes for – say, my kids. Yes – their baby photos were scheduled to be lovingly arranged in pink and blue albums, closely followed by their toddler photos and their grade school photos. Way to go, mom. The oldest is already off to college.

So I really plan to do all this great archiving stuff. Like copying each of the 10,000 slides onto a DVD, make several copies of that and distribute them to each member of my family. I really do plan to scan each and every photo and assemble albums. I will cut and splice the Super 8 footage and create a video montage that would make Martin Scorsese proud. But for now, the footage is piled in a box in the hall closet, looking like a nest of Black Mambas, the slides are vacationing under the living room piano and the baby photos are right where they should be: stacked in a Budweiser box in the corner of the extra bedroom.

As far as the rest of the photos, you're guess is as good as mine. I'm sure they're safe. Somewhere. But for now, I’m enjoying the fact that I found this photo of my dad. He was in Greece, traveling with some friends after the war. He’s on the right, the tall, dapper guy with the great smile. I especially like the guy sitting on the column, smoking a pipe. His name is Bud Ritchey. He and his wife Clarinda traveled with my parents when they went on their honeymoon, a couple years after this photo was taken. Ahhhh memories. So if my brother or sisters are reading this right now, hope you enjoy seeing this photo too. And thanks for your deep confidence in me for being the Family Archivist. I promise to get the rest of them copied, cropped, loaded onto DVDs ASAP. If I can just find them.
Email Post
Labels: family photos