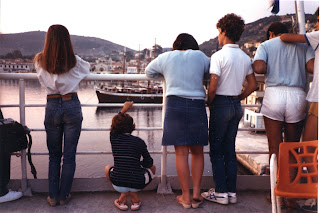 I watch her cross the deck of the Argostoli. She resembles the figures in the Minoan frescoes from Akrotiri I had seen in the archaeological museum in Athens; women with slinky bodies, coiled tendrils of black hair snaking down their backs, kohl smeared eyes, bangled wrists and brazen gestures. Her name is Sophia, and she slides her arm around the Director’s waist as they lean into the balustrade together. I’m only just now getting to know my team members, but as I stand here, huddling with the group on the deck of this ferryboat, I realize she is correct. We are primarily women, heading towards this island with a testosterone-heavy history. We stand at the ready to plumb its depths, having traveled all this way in our mission to prove that the paragon of all male adventure heroes existed. In part living out a dream, I am traveling to the island of Ithaka to search for the legendary palace of Odysseus, following in the footsteps of famed explorers such as the iconoclastic Scottish archaeologist, Sylvia Benton, and the notorious Heinrich Schliemann; the self-taught German businessman who discovered another of history’s most illustrious and sought-after sites ---- ancient Troy.


For the longest time, I lean against the railing, the salt air whipping my hair into knots, waiting to see something. I want to be the first to spot this place I’ve been imagining for years; I want to see if it looks anything like the vision I’ve had in my mind. The ferry has been chugging for hours now, having left behind the port of Patras and forging ahead into a platinum expanse of sea. The horizon is indeterminate; the vague outline of the mainland behind us is blurred, blending land and sky into a continuum. Then in the distance, I see something forming. As we grow closer, the island appears, at first a milky mirage, shimmering out of focus – making me wonder, is this place real? Slowly, the mirage congeals, seeming to rise from the surrounding Ionian in front of my eyes----
then, reflecting the late afternoon light in shades of turquoise, dun and emerald, it materializes into a Cyclopean parfait of shore, earth and distant peaks.

What I don’t know now, is that I will continue to return to Ithaka, like Odysseus, over the next 20 years, and my journeys to the island will be modern odysseys, involving busses, cars, ferries and planes… with always fascinating companions along the way. Once, at the Corinth bus stop - the halfway spot on the Athens to Patras highway where passengers file off to purchase souvlakis and smoke cigarettes - my seat partner took pity on me. Jet-lagged and slumped against the grimy window, I was awakened suddenly to find a warm honey cake tossed into my lap. I looked up to see an old woman in black clucking her tongue disapprovingly as she lowered herself into the seat next to me; when I tried to thank her, she waved her hand dismissively. To her, I was a crazy American girl traveling alone, and hers was a matter of national duty. I had to be fed.

Odysseus had to battle the wrath of Poseidon in his attempt to return to Ithaka, but he never had to board a carferry at a Greek port and drive a stick shift backwards across a narrow gangplank, scarcely avoiding a drop into the sea. While Scylla and Charibdes and the Sirens kept Odysseus away from his homeland, gasoline and ferry strikes would have the same effect, leaving me stranded on the wrong shore, looking across a wine-dark sea, full of longing.


Over the years, I have had a recurring dream of missing the ferry to Ithaka. In it, I am always left behind on the wharf, seeing the boat just disappearing out of sight, imbued with sadness and a pressing sense that I am running out of time. Once I actually did miss the ferry; and standing on the pier, watching it round the promontory and turn out of sight into the glassy Ionian, was eerily similar to my dream. The Greeks have a word for it: nostos, which can be loosely translated to how I always feel about the island: a persistent ache for homecoming.

The story of Odysseus is a classic male epic, rife with battle, maiming and monsters. On his journey home from a war he has fought for ten years, he has to endure another ten, impaling one-eyed giants with sticks, watching his crew be sucked down a vortex in the sea, and traveling to the land of the dead….and seeing the island looming in the distance, it does appear at first glance like some sort of antediluvian beast. Yet as we grow closer, it becomes clear that Ithaka is not a leviathan, floating all alone in the mists of the Ionian. Watching a line of chalk where rock meets the sea as we glide along her coastline, I realize she’s convoluted, with voluptuous contours: Ithaka is, in fact, a feminine island.

“Watch now, girls, the big turn is coming,” the Director calls to us, and we all gather on his side of the deck, the boat shuddering as its engines strain to change direction.

It is as though we are entering a birth canal. I feel the big ship rotate, and a hush comes over the passengers; we are sharing some sort of silent, spiritual moment, with only the massive, palpating roar of the engines providing a musical score. There - a peak comes into view, magical as it passes in the distance. The landscape is balding, with patches of scrub and sage against the strangely opaque blue earth. Nothing remarkable, really, at first glance. Just an endless, undelineated slide of earth meeting water. But now the turn: I stand on the deck, massive engines humming a litany beneath my feet. We are entering a womblike encasement, where land is surrounding us --- but where is the entrance to the harbor? I watch, entranced, and the turn is endless.

A mountain flanks us on one side, jutting straight out of the water to a soaring height, a thin scar along its face where a road must be. Another rise comes into view. Ah, Homer’s leaf trembling Neriton, which in antiquity would have been covered in oaks. Looking at this place with such a celebrated, ancient pedigree, I suddenly realize that people still inhabit it. Drawing nearer; I see houses, cars passing like insects on an ant farm. I am thinking about how Odysseus once sailed to these shores and suddenly forget my reason for coming here. I am no longer an archaeologist who will merely inspect what’s beneath the surface of the soil. At this moment I am an awestruck tourist, lucky enough to have a chance to walk in Homer’s footsteps.

In the following two decades as I anticipate this magnificent turn into Ithaka’s harbor, I will stand alongside Odysseus in many guises. One memory of a late May crossing stands out; a young Swedish man, outfitted for camping, wedged his way next to me on the deck of the S.S. Argostoli to take in the view. Weighed down by a large khaki pack on his back, his white blond hair rearranging in the stiff breeze, he leaned over the balustrade; I noticed he held a book in his hands. At first glance, I thought it might be back packer’s guide to Greece, but on closer inspection I could see it was a dog-eared copy of The Odyssey. He fingered the pages lightly, reverently, as he watched the tan colored earth pass by. I could only guess at the excitement it must have given him to be seeing a legendary landscape he had long dreamed about, coming alive for the first time before his eyes. It was in that moment I realized he wasn’t planning an average camping trip; this young man was a kindred spirit. He had come, like so many before him, to put a face on the words of an epic poem.

Yet it was a different pilgrim who captured my heart on this precious final approach to the island. Shrunken with age, an old man stood stiffly at the bow, his bony hands curling around the rail, appearing to cling for sheer life. He chatted animatedly about his life in the United States, finally confiding that he was returning to Ithaka after thirty years away. As Vathy drew nearer, he pointed out places he had known – this is where he had lived, this is where he had gone to school. Eventually we fell into silence, sharing the beauty of the village, whose houses gripped the water’s edge in an arc of pastel. The town’s name, Vathy, means deep, and refers to its harbor, one of the most beautiful in all of Greece. I prefer a more profound translation: nothing less than the gravitational pull the island exerts on those under its spell. This man had lived an entire life away, building a family and career in a distant land. Yet he was coming home to the island of his childhood, to touch the earth again, and to connect with some unseen, lodestone urge. For those who resonate with Ithaka, it remains an omphalos, a geomantic nucleus of life. One can leave, like Odysseus, for long periods of time, but know that it will always be there, a heart in exile, beating patiently for its lost children to return.

I wondered if the old man still had family on the island.
“How long are you planning to stay?” I asked gently, afraid to break his reverie.
“No, this time I am not leaving,” he said, watching the deckhands prepare to launch the ropes, umbilical cords to the mother shore.
“I am coming home now for good, because this is where I was born, you see…” he paused, staring straight ahead at the approaching harbor, his last words almost inaudible, “…and because this is where I wish to die.”

After an achingly endless centrifugal spin, the ferry is released through the rocky gates that flank the opening into the harbor. Watching him turn to pick up his bag and shuffle unsteadily towards the gangway, it occurs to me that Ithaka personifies life’s major transitions --- and not only men go on life-changing journeys. Suddenly it’s no longer just the archaeologist in me who’s glad to be here, hoping to unearth some artifact, some treasure from its soil. It’s the woman; happy to have a chance to immerse myself, even if for a very short time, into a place where history still lives, the ancients still breathe… and if you listen very closely, the stones still speak. And like a midwife, hoping to assist in bringing something new into the world…..I can’t wait to get my hands in the dirt.
Email Post
Labels: arrival excavation ferry Greece Ithaka