hope your road is a long one 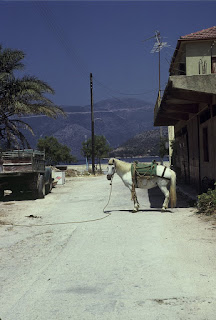 Starting out with something new is never easy, and this whole blog thing is no exception. But I need a place where I can tell a story …
so before I begin, a question to keep in the back of your mind:

Have you ever traveled to an unfamiliar place and immediately sensed a connection with a landscape that felt like home…yet this same landscape also made you feel unsettled?

For me, that place is Greece, and the story begins on an island called Ithaka.


In 1984, just out of graduate school with a degree in Greek archaeology, I set out for the Ionian island of Ithaka with an international team and a copy of The Odyssey in search of the legendary palace of Odysseus. For over 200 years explorers and archaeologists had been coming to the island to find the palace, yet they had always come up empty-handed. In the initial seasons, it was thrilling to follow in their footsteps and resume the search for one of the greatest finds in archaeology.


Yet after two years the palace had yet to be located. Funding was drying up, and the pressure to locate a royal settlement and prove that Ithaka was the island of Odysseus had created tremendous stress on all the team members. When people are confined to remote areas for long periods of time, conflicts develop -- familiarity definitely does breed contempt. Professional jealously, backstabbing, love affairs and nasty breakups between team members often occur on excavations, and ours was no different. Personal problems developed between the excavation leadership and staff, resulting in a deep lack of morale and growing paranoia, not to mention deteriorating relations between the dig and island leaders as to the future of the excavation.

With no evidence of a palace, I returned to the States to resume my life. I went to work in a museum, settled down and after many years started a family….but the island was never far from my mind. I had always wanted to be a mother and adored my family, but I also missed my life on the island. On Ithaka I had experienced a feeling of freedom I had never tasted anywhere else...yet there was something about Greece that also frightened me; being there I felt challenged psychologically, as though life lessons were imbedded in the landscape. I fantasized about returning, but under what circumstances? The excavation was yielding few results and money worries were a constant issue. In time, it became clear I didn’t need the excavation to go back; I could go back just for myself. Whether I realized it or not, Ithaka had already set me on my own odyssey.

In the following decades I began a series of journeys, leaving behind my husband and children time and again to return to the island. Yet before each trip I suffered terrible guilt along with a sense of dread that I might not return to my family ---- what if the plane crashed? What if something happened to my kids while I'm gone? I knew I would never forgive myself for my selfishness. But the desire to return was gnawing and persistent. Caught between my role as wife and mother and a Siren's call from a distant island, I often felt like Persephone: the goddess who lives part of her life in a world aboveground and part of it in the Underworld.

And was there a guy? For a brief time during the excavation, there was. As a young girl living on a remote Greek island, things happen. After all, this is a Persephone story, and Hades is lurking in the background. Yet here I could be anyone I wanted to be: travel has a funny way of freeing us temporarily and letting us try on new personas. Far away from home you are not labeled, categorized, or subject to someone else’s idea of who you are. Over time it would become evident that I wasn’t returning for anyone but myself.

I am still returning, probably always will. In the end, Ithaka has become more than an archaeological site - it has become a sacred destination; a place where I’ve experienced deep and enduring friendships with memorable, and occasionally crazy islanders, an escape valve from daily life and a sanctuary in times of loss. It is a place where I have lived through all the phases of a woman’s life. Arriving as a girl, I continued to return to the island throughout my years as a young wife and mother…. and now, with my children growing up I feel myself entering another phase...hopefully that of a wise woman. I've traveled here with my mother, my best friend, my husband, and most recently I've introduced the island to my daughter. But for the most part, I've traveled here by myself. It would not be going too far to say that my relationship with Ithaka - and Greece in general - has formed me. The island may not have yielded a palace, but it has ultimately led me to other kinds of treasure --- an ever-deepening appreciation and love for my family, an unanticipated bond with the mythical landscape of Greece, and in the end, a retrieved sense of self. As it had done with Odysseus millennia before, Ithaka has taught me a valuable lesson:


For anyone who has longed to be in another place, live out a different life, and experience the pathos that comes from being pulled into opposing directions, I hope my story will relate. I still head underground and work as an archaeologist on the Greek mainland, and often travel to other parts of the country. Like Persephone, who moves between worlds, I'll shift between past and present in this blog, and when the subject is Ithaka, as it will often be, the names used will not be real unless otherwise noted.

I am grateful for many things: a wise and patient husband, and for my kids who, in spite of my frequent absences, turned out great. I've flogged myself for so long thinking I was a "bad mommy" and for feeling like I was a abandoning them, but now I think differently. Something my husband told me years ago changed my mind. Days after the TWA flight crashed off Long Island I was scheduled to return to Greece. Terrified that the same fate would befall me, I announced to my husband that I wasn't going. I couldn't bear the thought that my kids would be rendered motherless just because I was doing something I wanted to do. Better that I stay home with them and not risk it. Gently, he reminded me of something I have never forgotten. He said, "Remember - kids don't do what you say: they do what you do. If you stay home and deny yourself something you love to do, they will pick up on it. So when they grow up, do you want them to ignore their own needs and desires and play it safe .....or do you want them to go out in the world with open arms and follow their bliss?"

I got on the plane and never looked back.

There's a photo of a horse at the top of the page. I snapped it one day, wandering the streets of Ithaka's main town. I thought it went well with a line from a poem that is always in my mind, Constantine Cavafy's Ithaka:

As you set out for Ithaka
hope your road is a long one,
full of adventure, full of discovery.
Laistrygonians, Cyclops,
angry Poseidon - don't be afraid of them:
you'll never find things like that on your way
as long as you keep your thoughts raised high,
as long as a rare excitement
stirs your spirit and your body.
Laistrygonians, Cyclops,
wild Poseidon - you won't encounter them
unless you bring them along inside your soul,
unless your soul sets them up in front of you.


There's more to the poem -- but it's worth savoring bit by bit. So for now, hope your road is a long one. And hope you will travel some of it with me.