Goddesses in the Dust: Hecate and the Crossroads

Unearthing the Divine Feminine, one archetype at a time...
Persephone is actually part of a trinity of goddesses representing the three major phases of a woman's life. Maiden is the equivalent to Persephone, Mother is related to the goddess Demeter, and Crone - or Wisewoman - is represented by Hecate.

Hecate has been given a bad name, much in the way age has a negative connotation in our society. Every commercial you see on TV and every slick ad in fashion magazines screams at consumers to do everything one can to keep aging at bay - to look youthful forever.

But what does this do to our perception of growing older? Wrapped in such pessimistic marketing, our western culture's tendency to focus on youth and beauty sends the message that aging is to be avoided at all costs. But what about the wisdom that is gained from having lived many years? Why don't we value our elders as other cultures do? This is where Hecate comes in.

As D.J. Conway states in her book, Maiden, Mother and Crone,

"The Crone aspect of the Great Goddess is the least understood and most feared of the three aspects. She has been called the Terrible Mother, the Hag, the Dark Mother, the Wise One. Because She deals with death and the end of cycles, most people tend to avoid this face of the Goddess. In life, we go out from the Crone's recycling cauldron into existence, then eventually return again to Her waiting vessel. Jung calls Her the dark side of the human psyche. Sometimes this is called the 'shadow self', the dark personal demons we each have buried in the subconscious mind. In order to heal these wounds and exorcise these demons, we need to follow the inner labyrinth to the place where the shadow self dwells. We must develop a relationship with this shadow self, the Dark Mother within, before we can empower ourselves again."
Hecate is called the goddess of the crossroads because food offerings were often left at three-way intersections in her honor. Sometimes three masks would be hung from a pole erected at the intersection by those seeking guidance from the goddess in choosing the right direction.

It was Hecate who "saw" Persephone's abduction by Hades, the god of the underworld, and informed her mother, Demeter. Yet as Conway states, "she does not interfere when the Maiden is dragged down into the underworld. Demeter is outraged and vengeful, but Hecate remains calm, knowing that certain things in life must come to pass and there is little point in becoming hysterical about them. If we do not know this aspect of the Goddess or acknowledge Her wisdom, we cannot have a truly integrated personality." 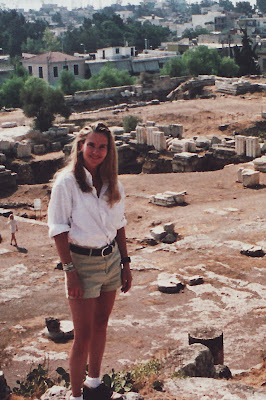 A few years ago I visited ground zero for the goddess trio of Persephone, Demeter and Hecate. This crossroads is now the intersection of the ancient and modern at its worst. Surrounding the modern village and ancient site of Eleusis are flaming towers of oil refineries. Tankers are anchored off the coast to offload crude oil from the Middle East and the smell of burning oil permeates the air. Scattered everywhere are remnants of magnificent temples dedicated to the Eleusinian Mysteries, which were celebrated annually at this site just outside Athens. If you close your eyes, you can imagine the ancient beauty of the landscape, in which elegant buildings stood among the pine groves, waiting for hundreds of pilgrims to walk the Sacred Way from the Parthenon to be initiated into the ancient secret cult.

Somehow, Hecate is patient with humanity. She personifies the wisdom of age when we learn from the mistakes we've made in life. Hecate teaches us that, instead of fighting against them, we can move forward in understanding and cooperating with the natural rhythms and wider cycles of life.
Email Post