Letters from the Underworld: Cairo and a Tale of Shepheard's Bar 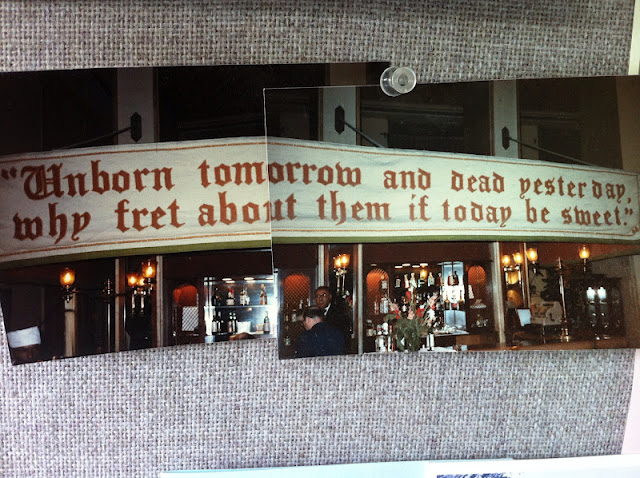 It was January, 1985. I was traveling through Egypt with my parents and younger sister. My dad suggested we make a stop at a famous hotel bar that was popular with expat writers back in the early 20th century.

Downtown Cairo was a maze of cars, dust and noise. Directly in front of the Cairo Museum it seemed that eight different roads converged, with cars driving in any which direction, all honking horns. We crossed a bridge over the Nile at dusk and once we stepped inside the hotel, all the chaos seemed to fade away into the background.

It was one of those old world kind of places, lost to another time...or century. Heavy wood paneling, flickering sconce lighting on the walls. The tinkling of glasses on well worn tables, martinis being prepared. Men in suits manned the bar and soft music played.

But it wasn't the bar itself  that captured my imagination.....it was the massive fabric banner that hung above it. Embroidered in old English lettering, it hovered above the room like Damocles' sword about to drop. I got the gist of it: BE HERE NOW, it intoned. Live for today. In other words, all the world may be going to hell in a hand basket, but bottoms up my friend. Eat drink and be merry for tomorrow we diet. Or as in some cases that this storied city has witnessed, tomorrow we die.

Equally storied men - and women - have frequented Shepheard's Bar over the years. The writer T.E. Lawrence, explorer Henry Morton Stanley, Winston Churchill, Theodore Roosevelt, The Prince of Wales and the Aga Kahn, to name a few. More recently, Shepheard's inspired the setting for several feature films, including The English Patient:

Scene: the Sand Club members gather in a plush bar. Geoffrey Clifton enters, only to be asked where his lovely wife is. Geoffrey gestures to the lobby, where Katharine Clifton sits, reading, and says in an apologetic tone:

"Chaps only in the Long Bar."

The hotel has seen its way through several wars, including the Crimean War, the Boer War and two World Wars, and has been the site of celebration for such events as the opening of the Suez Canal in 1869. The original burned to the ground in 1952 and was resurrected in its present form in downtown Cairo, where it continues to witness the death of leaders, revolution and the Arab Spring.

The photos of the banner (it took two shots to capture it in its entirety) sit above my desk as I write. Given the current state of our world, its message:

Unborn tomorrow and dead yesterday,
why fret about them if today be sweet

seems more meaningful today than ever.