Goddesses in the Dirt: Gift of the Double Axe


When I was in graduate school, I wrote my thesis on the Minoan culture of Crete, specifically their ivory objects and figurines. Years later, when my father traveled to Greece on a cruise, he returned with a gift for me: 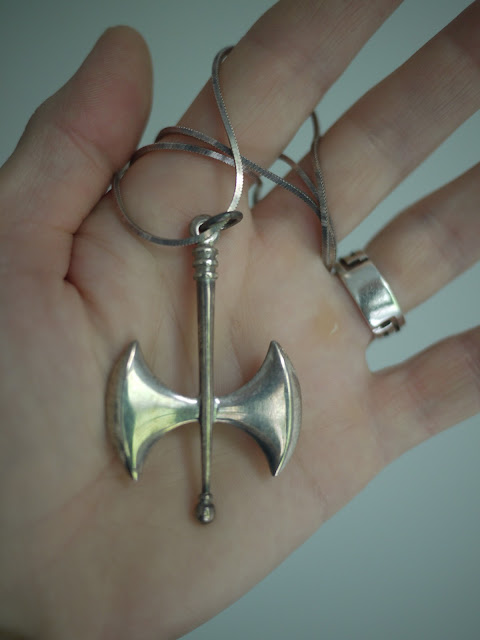 I had this in my hands at his bedside when he was dying. The gift was a silver necklace from the island of Crete, in the shape of a double axe. 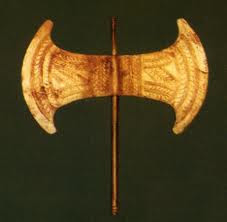 When my father gave it to me for Christmas, years ago, he told me it was a symbol of power and he thought it appropriate for me to have it. I don't know how much Dad knew about this symbol. Normally an axe would be considered a tool of war, but the double axe of Crete is actually an ancient ceremonial symbol reserved primarily for females.


The ancient Greek word for the double axe is labrys, which is the root of the word labyrinth.

One of the most famous labyrinths is that of the Minotaur of King Minos of Crete. When King Minos' wife gave birth to the Minotaur, a half-man, half-bull creature, he locked it away in an elaborate labyrinth so he couldn't escape. As a blood sacrifice, the Minotaur was provided an annual tribute of seven young men and seven young women from Athens as long as he lived. In the last group of men and women to arrive was Theseus, a son of Poseidon. King Minos' daughter, Ariadne, fell in love with Theseus and helped him to kill the Minotaur by giving him a ball of yarn with which he could find his way through the labyrinth.


Both the double axe and the labyrinth are associated with the Goddess. The labyrinth, according to D. J. Conway, is the "path leading back to the center" and "regeneration through the Great Mother." The double axe is thought to resemble the shape of the Goddess as butterfly, which signifies life, death and resurrection, as well as the crescent moon, also associated with the Goddess. The axe was used for ceremonial purposes which were believed to have been conducted by priestesses who held positions of power within Minoan culture.


While my dad probably was not aware of the fact that women were strong and powerful in this culture, I cherish the gift as an appreciation and celebration of personal power.  The necklace is not something I'll probably wear, because it simply is too big a piece of jewerly. Instead, it's on display where I can see it every day when I get up, entwined with a necklace my mother used to wear. 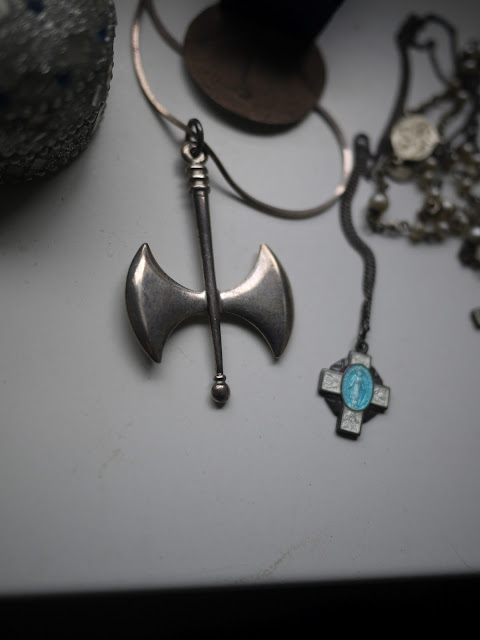 ....of the power of women, the current need in our world for rebalancing male and female energy, and the rebirth of the Divine Feminine.