Goddesses in the Dirt: A Tale of Subterranean Medusas 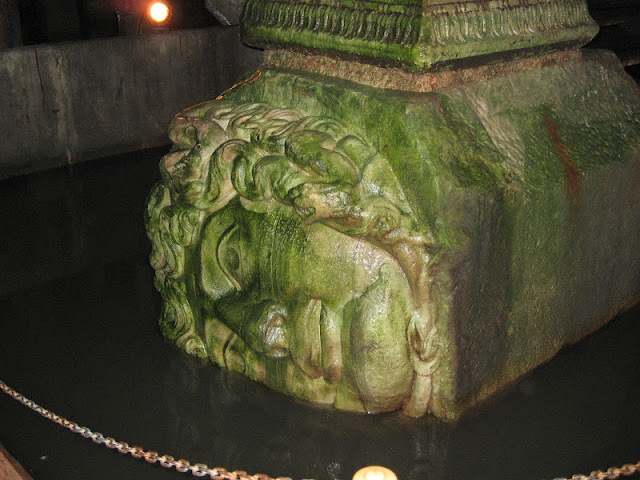 It's eerie, I have to admit. When I came upon this sculpture I had to ask myself - why is it lying sideways, submerged in water.......and underground? But this is what I happened upon, one searing hot day, deep beneath the streets of downtown Istanbul...

Who would ever think, that under such magnificent buildings such as this 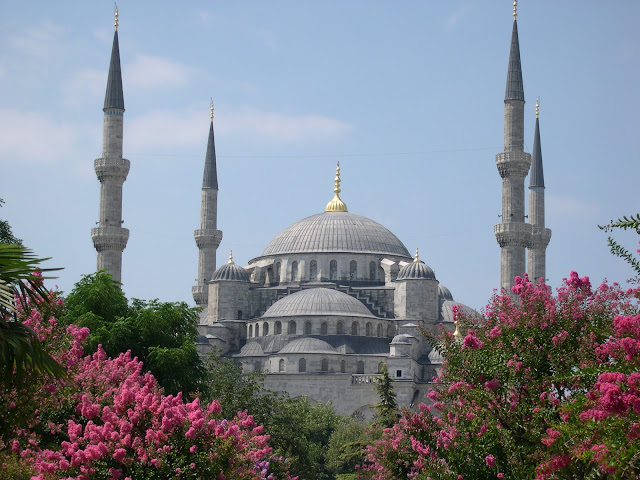 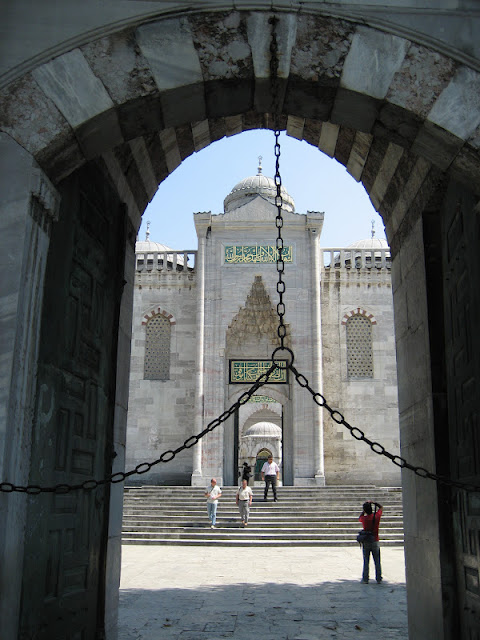 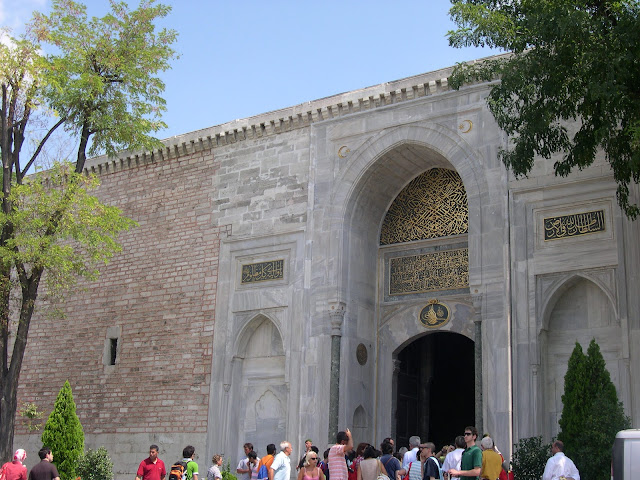 Built in 532 B.C. by the Emperor Justinian, this structure was used as a reservoir for water storage, and during the Ottoman period was used to water the grounds of the famous Topkapi Palace. 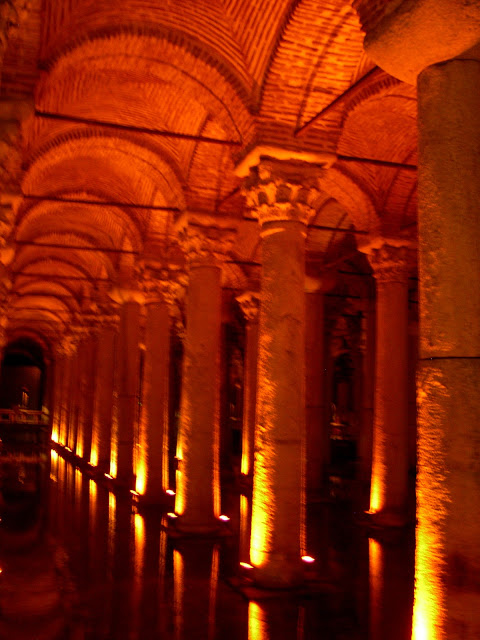 Strolling along this vast underworld 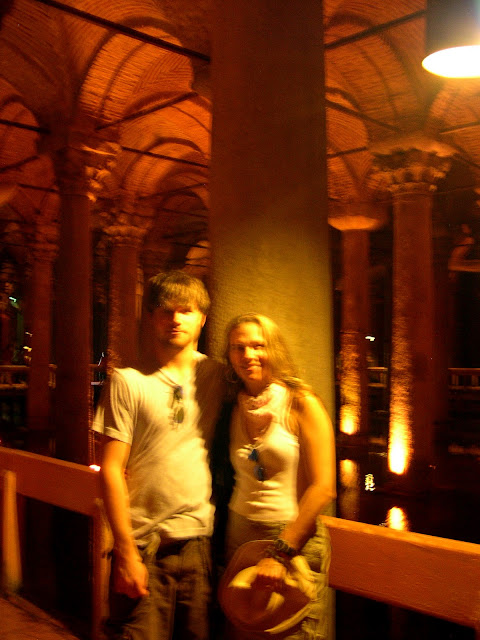 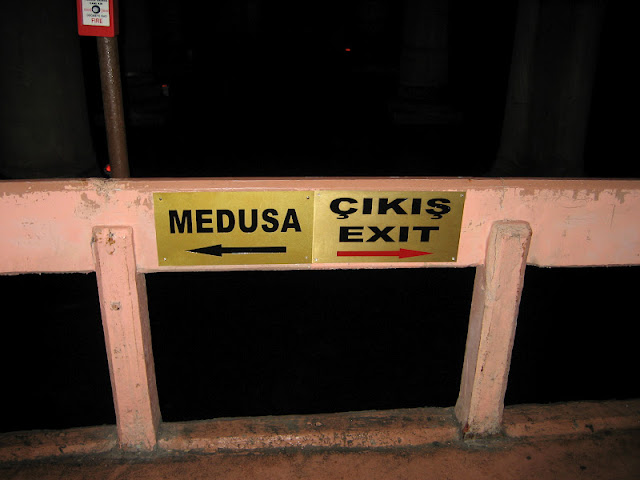 leading to this......so why were two heads of the mythological character the Medusa placed down here? 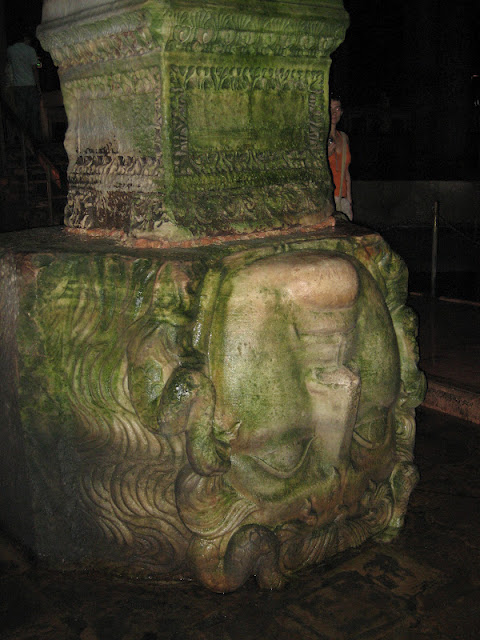 Supposedly the sculptures were taken from another site by the Christian builders who did not want to honor a pagan god, so they were placed sideways and upside down. Additional theories suggest the unusual placement was done to ward off evil, or to negate the power of the Medusa's gaze.

Who was Medusa?
Like many of the Greek myths, the tale of Medusa serves as a warning to mortals who anger the gods.......or in this case, a goddess. Medusa was a Gorgon, or female monster, who was blessed with a beautiful face and gorgeous long hair. One day Medusa was at the temple of Athena and caught the attention of the god Poseidon, who took her as his lover. Athena caught wind of the affair and flew into a rage. To punish Medusa she turned her glorious head of hair into a nest of vipers and made her so hideous that anyone who looked upon her would turn to stone.


Medusa's ultimate demise came when Perseus, the son of Zeus, attempted to rescue his mother Danae from King Polydectes. In order to do so, he needed to retrieve the head of Medusa, whose blood was said to be all-powerful, and could be used to reanimate the dead. With the help of Athena and Hermes, the messenger god, he accomplished his mission by using the gifts he was given: a shield which reflected the Medusa's deadly glance and a curved sword to sever her head.
So if you ever find yourself beneath the streets of Istanbul, be sure to follow these mysterious signs 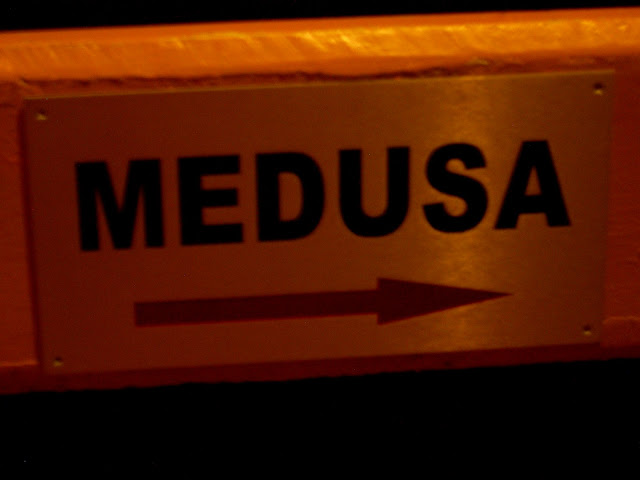 for a truly hair-raising experience....