Goddesses in the Dirt: Kwan Yin - Goddess of Compassion (we need you now more than ever)

Unearthing the Divine Feminine, one archetype at a time.... 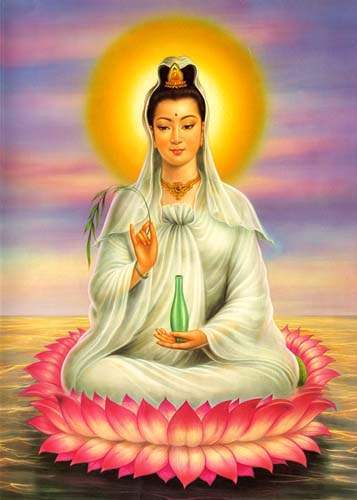 Goddesses in the Dirt - Issue #23: Kwan Yin - Goddess of Compassion

A 61 year old man falls in a crowd running into Target on Black Thursday. As he suffers a heart attack, people step over his body to get into the store. A two year old girl wanders away from her mother in a busy marketplace in China. She steps into traffic and gets run over - twice - while passersby continue with their day.
These tragedies force us to ask the question: Where is the spirit of compassion in humanity?
Ironically, the goddess Kwan Yin - the goddess of compassion - has her origins in China. Also known as Quan Yin, Tara, Amitabha and Kannon, she is the goddess who forgoes the bliss of Nirvana, or eternal salvation, choosing instead to save all the children of humanity. She is the descendent of Avalokitesvara, a Sanskrit name which means "She who harkens to the cries of the world."
The iconography of Kwan Yin is varied - often she wears flowing white robes and holds a white lotus flower in her left hand, a symbol of purity. Sometimes she is depicted as a many-armed figure, with each hand containing a different symbol of compassion, some forming a yoni mudra, or door for entry to this world through the womb or female principle. 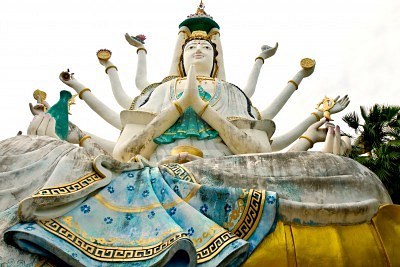 As the enlightened one, she made a vow to remain in this earthly realm until all sentient beings have attained enlightenment and have become freed of the often pain-filled cycle of birth, death and rebirth.
There is little dogma involved with the contemplation of Kwan Yin. All that is necessary is to develop an inner sense of devotion and service to this world. Doing so has the effect of leading us to become more compassionate and loving ourselves.
The writer Don Miguel Ruiz says that what really matters in life is to be what we really are - to be authentic, to enjoy life and to be love. Not the symbol of love which humans have distorted, but real love, the feeling that cannot be put into words. The kind of love which - in a most extreme form - motivates a person to run into a burning house to rescue a stranger, and most recently in the news - gave a group of people the strength to lift a car off a victim trapped underneath.
Kwan Yin seemed absent in the tragic stories of the man and the little girl, but her spirit manifested. Eventually an old man came to the rescue of the child in the marketplace. Sadly, she had passed on, but the man carried her back to her mother, who was hanging out the laundry and had been unaware she was missing. In a heart wrenching and tragic tale that points up how some do not value human life, the most deeply ironic footnote was the old man's profession...a garbage collector.
I'd like to think the holidays are a good time to contemplate Kwan Yin and try to connect to our own inner spirit of compassion. No matter how much damage we humans do to ourselves and to one another, we always have the ability to choose our emotional response in any situation. Kwan Yin is patient with us: ever present, she is always waiting to manifest, and eternally ready to teach the lesson of compassion and love.
Photos from Google images
Email Post
Labels: Goddesses in the Dirt