Goddesses in the Dirt: Calypso 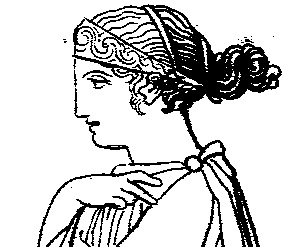 Goddesses in the Dirt - Issue # 14: Calypso
Calypso is a nymph who falls in love with the hero Odysseus, who, after fighting the Trojan War for 10 years, is trying to get back home to his wife and son on Ithaka. Sailing back from Troy, Odysseus has blinded the Cyclops, known as Polyphemus, and to pay for this outrage Odysseus must endure the wrath of the giant's father, Poseidon. As god of the sea, Poseidon makes sure that Odysseus' ship encounters huge waves, winds and throws him off course to Ogygia, the island of Calypso.
Upon seeing Odysseus, Calypso falls in love with him. In her desire to make him her husband, Calypso detains him on her island for a number of years - some accounts say seven, some eight. She offers him the ultimate reward of eternal life if he would stay with her on Ogygia. However Odysseus misses his wife, Penelope, and son, Telemachus, who wait patiently for him at home on Ithaka, where all the while Penelope is fending off the increasingly bold suitors who vie for her hand in marriage. 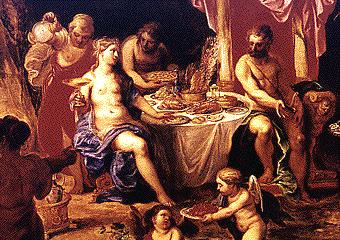 Odysseus and Calypso. Hendrik van Balen, Jan Brueghel the Elder and Joos de Momper the Elde
As beautiful as Calypso is, and as tempting her offer of eternal youth and life, Odysseus cannot accept such a deal. He eventually appeals to the goddess Athena to find a way to escape from Calypso's grip. Athena asks Zeus to release Odysseus and Calypso does, albeit reluctantly. She complains that a relationship between a goddess and a mortal is doomed to fail. In spite of her unhappiness in having to let Odysseus go, she helps him build a raft and supplies him with wine and food for his journey. 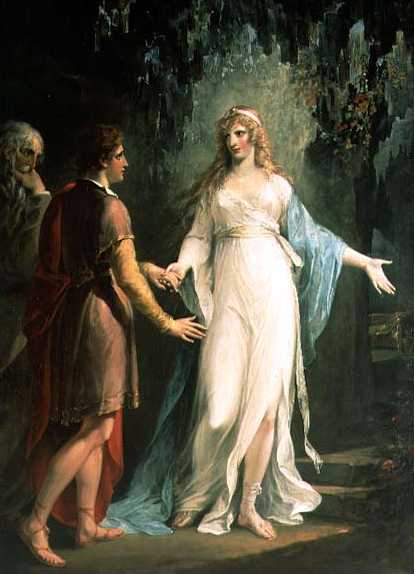 Calypso receiving Telemachus and Mentor in the Grotto by William Hamilton
The origin of the name Calypso is from the Greek word calypto, which means to conceal, or hide. 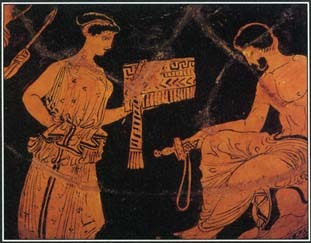 Greek Vase Painting, 5th century B.C.E.
I love The Odyssey, the story of an eternal yearning to return to the island of Ithaka - beloved to both Odysseus and myself. Calypso also happens to be the name of the place I stay on Ithaka - to be featured in an upcoming post ~
All photos courtesy of Google images
Email Post
Labels: Calypso Goddesses in the Dirt