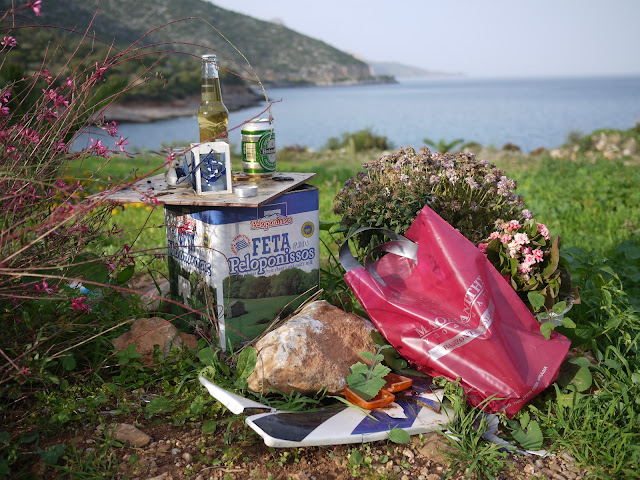 last november i was driving along an isolated stretch of the greek coast when i saw some objects left on a bluff overlooking the sea. i got out to investigate, and saw this strange assemblage of items --- i mean, why the bouquet of flowers? a boulder, holding down some cardboard. a small board, like a chess set, making a metal feta container into a table. the beers positioned elegantly on top, unopened.
and the small candle. unlit.
it was as if someone had planned a picnic, then - all of a sudden - abandoned it, as though an alien abduction had occurred.
greece is a place of mystery, and some things are not meant to be solved. being a romantic at heart, i don't see this as discarded trash.
no.
i'd rather see it my own way, imagining the possibilities:
was it a picnic, abandoned mid-bite - or not even started? an attempt at conceptual art? or could it be a shrine to unrequited love..... someone who had wished for a chance to recline in the grass with their intended and relish a view of the sea, but for some unforeseen reason, would never be able?
most likely, a motorcycle careened off the road here. some teenage boy taking a hairpin turn too fast. spinning out of control, hitting a rock. it happens so often here. usually you find one of these erected at such spots. 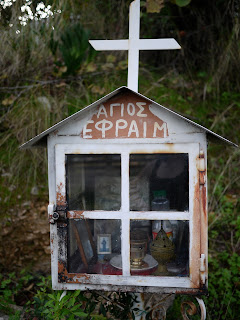 filled with icons of saints, candles, bottles of oil and other offerings or odd items -- i've peered into many and seen even cigarettes, coke bottles.
perhaps this accident scene is fresh. too new. not enough time has passed to erect a proper shrine.
but i prefer the abandoned picnic theory.
we either see mystery or we don't.
i see it everywhere. 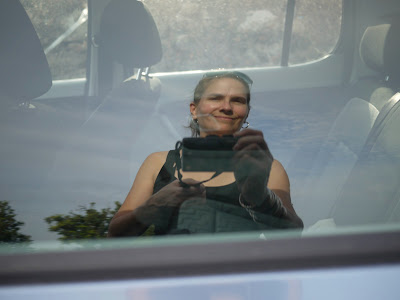