i started this blog in part as a way to publish excerpts from a book i'm writing about returning (like odysseus) to the greek island of ithaka over 20 years (as well as other parts of Greece) ...this is the latest chapter. some are short and some are a bit longer, like this one.

thanks so much for reading --- and if you're interested, links to previous excerpts appear in a sidebar.


excerpt from a memoir in progress: Travels with Persephone: An Archaeologist's Life in the Land of Odysseus 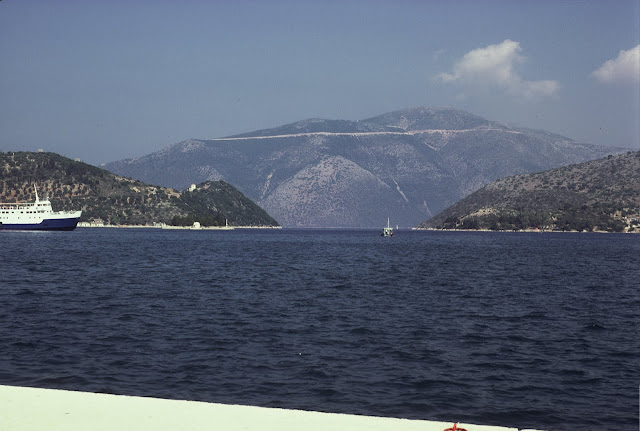 Hanging over the ferry railing with my teammates, I watched the drawbridge drop and scrape along a concrete pier: the grandeur of arriving on Odysseus’ island was quickly diminished when it came time to disembark. A convoy of trucks, taxis, cars and motorcycles disgorged from the opening, and a cloud of carbon monoxide filled the atmosphere with a thick, oily smoke. The ferry arrived only once a day, and it was the main show in town – the source of all food, supplies and the number one commodity on the island – tourism. Hawkers clotted around the backpackers strolling off the ramp, hoping to entice them to rent a room in their house.
A young man, handsome and tanned, approached the boat with a rose clenched between his teeth. The locals call him The Surgeon, I was to later learn, because he wore all white. In a matter of minutes he was engaging a group of young women in conversation, Swedish, by their looks. Giggling like schoolgirls, they followed him down the single paved road that wound along the shore towards the main square. From far away, Ithaka looked like it should: pristine, ancient and important. But from here it just looked like another Greek island in the height of the summer tourist season.
I found myself thinking how Odysseus’ return would have been different, stealing onto the island under cover of dark to hide from the slovenly princes who occupied his palace during his long absence. Surely he didn’t sail into the harbor with a boatload of motorcycles and locals carrying plastic bags full of cigarettes from the mainland. But this was the Ithaka of today, and somehow I would have to accommodate my preconceived notions of this legendary place – formed from a three thousand year old story – to the concrete reality of ferryboats, tourists and diesel fuel.
In the evening we dined at the Two Brothers. It was to become our favorite eatery, and we shored up against the outside wall of the restaurant, several tables pulled together on the sidewalk. The waiter spread butcher paper on the surface and snapped it down against the evening winds with rubber bands. Plastic napkin holders and ashtrays were assembled in the middle of the table with saltshakers filled with rice to counter the heat and humidity of summer. Like the few restaurants in town, this was a family owned establishment. Mom and Pop labored in the kitchen while children ferried the food to the tables and dishes to the sink. Looking inside, I could see bare bulbs hanging from the ceiling and a fan revolving sluggishly in the growing summer heat. Greek tourism posters adorned the walls advertising other Ionian islands, along with vases of plastic roses and shiny wallpaper, reflecting the yellow light in oily tones. Patrons, mostly tourists, filled the tables, but some locals were drawn in by the aroma of roast meat and fried potatoes. Mothers with chubby arms in flowered housedresses lifted children to stand on chairs with sturdy legs and rush-woven seats.
Later on in life I would come to adore the Greek taverna chair. An iconic symbol of the Mediterranean, it adorns many a postcard, and a mere look at one conjured up images of the conviviality of Hellenic culture. The more of them the merrier, and I had come to use them the way a Greek does. As Alexandra Fiala says in The Xenophobe’s Guide to the Greeks, “A Greek needs at least four straight-legged chairs in order to lounge properly: sitting on one, he places one foot on the rungs of two more, directly in front of him; then, tilting back the chair he is sitting upon, he supports himself by draping his arm across the back of another chair, strategically placed at his side. He may even need a fifth chair on which to park his coat.” I found at any given time while dining in Greece that I ultimately drew at least three of these lovely objects around me in a nest-like formation, and felt protected, safe and grounded.
The owner unloaded a parade of dishes on the table with a clatter, including roast pork, butter beans called giants, and salads with Technicolor red tomatoes and green peppers topped with slabs of thick salty feta cheese. The men dove in unabashedly, while some female team members, who as I later learned had food issues, leaned forward to peer into the bowls, seemingly measuring how much olive oil their thighs would allow them to ingest. Not known for daintiness, and hungry from the long trip, I assaulted the food like the men and piled my plate high with the smoky meat and the world’s best French fries.  A few swigs of pine scented retsina, and I could feel myself sinking into the arms of the Greek kitchen.
The town gripped the harbor like a pastel horseshoe. Its name, Vathy meant deep, and it lay astride one of the largest natural harbors in Greece; the most massive of ships could glide into its water without fear of scraping its hull against the bottom. Mountains rose up behind like bruised aubergines, dark and looming against the fading light, and the place felt like a magic cauldron. The wind picked up at sunset, whipping down from behind Mount Naion and whistling through the yachts, the halyards snapping against a forest of masts. The village beat like a heart, humming in this great, dark place I couldn’t wait to explore. After dinner we moved to the village square, or plateia. Children were racing up and down, screaming; tiny white lights were laced crisscross, from building to building, blinking like contrails of fireflies in a Midwestern July cornfield.