Goddesses in the Dust: Time for a Female Pope

Hey Catholic Church, listen up -- 2000 years is long enough for old white guys to be running things - it's time for someone of another gender or ethnicity to have a shot......

Time for a female pope.

Seriously, have you taken a look around? In many institutions women have begun to fill places of power traditionally the purview of men: Prime Ministers, Secretaries of State. But we have a ways to go. (Hillary in 2016 anyone?)

Yes, having been raised Catholic I'm aware of the fact that women are not allowed prominent roles in the Church hierarchy. This is a grimly outmoded paradigm, as half of humanity is not represented in the institution's leadership. Goddess knows there are a lot of hard-working, smart nuns toiling away in obscurity and ministering to the needy who would do brilliant justice to filling that pontiff's hat and are as deserving as the red-cloaked cardinals who patrol the Vatican.

Supposedly there once was a female pope - Pope Joan. 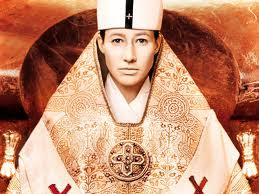 Born in 9th century Germany of missionary parents, a young girl named Agnes (also known as Jutta or Gilberta) grew up exceptionally bright, impressing those around her with her intelligence. At age 12 she traveled to Athens to study scripture, eventually forced to disguise herself as male to evade those of the time period who considered learned women to be unnatural and threatening to the status quo. Cloaked in the genderless clerical garb, she moved to Rome and rose through the Church ranks, becoming Cardinal first, and then Pope John Angelicus from 855 - 858, when her reign came to a sudden and - by some accounts - brutal end. 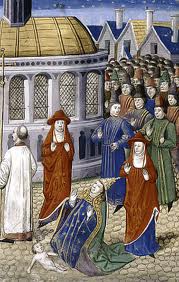 While mounting a horse to ride in a procession, she went into labor and gave birth to a son, but accounts differ as to what happened next: some say the crowd tied her feet to the horse's tail and stoned her to death as she was dragged along the street. Other stories say she was banished to a convent and her son eventually became a Bishop. The Church naturally dismisses the story as a myth, but until recently all subsequent Popes would never set foot on the street where Pope Joan supposedly gave birth.

Today, the image of a female pope appears in a card of the Tarot deck. It is considered a very positive card which represents wisdom, nature, pregnancy, the mother - and it also represents the hidden face of a man's life. 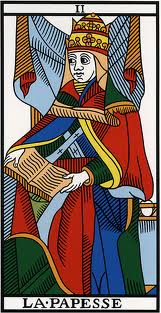 Orthodox Judaism similarly prevents women from rising up within its institution. Recently Israeli police arrested two women for donning prayer shawls and worshipping at the Western Wall in Jerusalem. 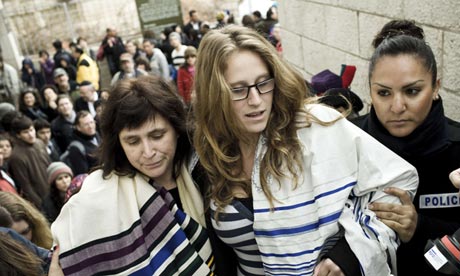 Rabbi Susan Silverman, who is comedian Sarah Silverman's sister, stated, "Theologically, I oppose the ultra orthodox ownership of Judaism. From a democratic point of view, it is simply a distortion that there is one group of citizens who rules the rest."

Note to the Papal conclave: as you get ready to blow smoke up the Vatican chimney for the 267th time, a word of advice: The leadership of healthy institutions should mirror their community. How long can you continue to pretend that 51% of the global population does not exist? It's time for a change. If you're not ready for a female Pope, then strengthen the institution from the ground up, and start, at the very least, by allowing women to serve the Church as priests. That way you'll have a shot at surviving the next 2000 years.
Email Post