Goddesses in the Dirt: Sisters, Then and Now 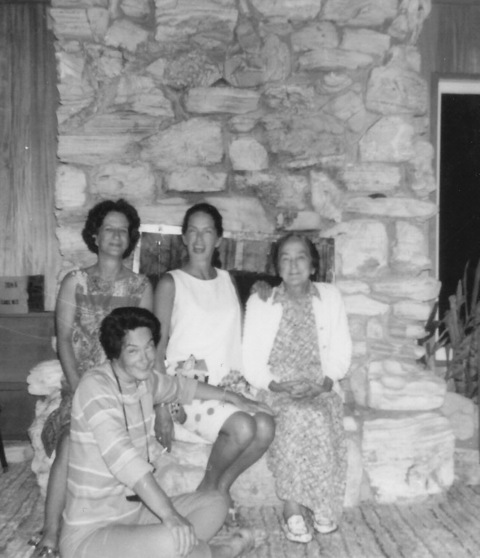 In the mid-1960s, my mother and her sisters, brothers and mother stayed for several days at a beach house on the California coast, gathering for a family reunion - Mom is pictured here, in the middle, with her mother and two sisters, sharing a laugh and relishing in each other's company. Over the intervening decades, all have passed on except for my aunt Nonie, the woman seated on the floor with the impish grin.


This past week, I came out to California to stay at a beach house located not far down the coast, to gather with my sisters and brother for a family reunion some 40 years later, in celebration of Nonie's 85th birthday - the last surviving sister.


The party was held at a favorite seaside restaurant of Nonie's, with about 30 family members who came in from all over the country for the celebration. As with my mother's reunion, there were lots of laughs, jokes and memories shared. Afterwards, we took Aunt Nonie back to her house and saw these photographs on her bookcase, of my mother, Nonie and my aunt Mary Kay. Looking at the images of these beautiful women, it struck me how full of life they were, ready to set out in the world. I knew the paths their lives would take: one of them would fly airplanes, one would travel to points far east and west, eventually meeting her husband in postwar Germany, one would stay close to home, faithfully caring for their mother.

My sisters and I took a moment to gather with Aunt Nonie for a photograph, another generation with their own set of unique stories. 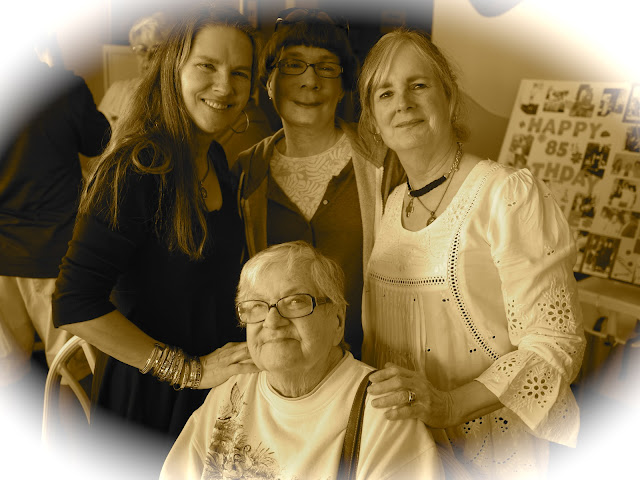 Sisters, family and memories were on my mind as I set out for an early run this morning along the boardwalk near our beach house. Gunmetal gray waves washed onshore, silvered rays broke through clouds, surfers speckled the water.

Just as I passed the Crystal Pier an old man approached me. He was clutching a bouquet of flowers and smiled, a gap where two teeth were missing. I slowed, then stopped. He reached out and handed me a tiny spring of olive leaves. Beaming, he pronounced, in a thick eastern European accent:
Is for you.


I couldn't detect from his accent what country he was from, but for a moment I toyed with the idea it might be Slovenia, the land of my mother's ancestors. I took the branch with a smile, thanking him. For a moment I wondered if I should leave it on a bench once he walked away, but then I changed my mind. Some people looked at me strangely as I sprinted by, clutching the branch, the leaves bobbing as I dodged dogs and skateboarders.
Returning to the house, we sorted through old family photographs. We shared stories from the past, some sad, some happy. We read from my mother's diary and learned things we didn't know about her. My brother eventually returned to his home, leaving us, three sisters, once again; laughing, sharing stories and memories, in a house by the sea.

Later on in the day, I was packing, setting the last pieces of clothing in my suitcase. Underneath my running clothes, I spied the leaves. I thought of the old man, coming out of nowhere, offering the olive branch. Maybe he was from Slovenia, maybe not, but it didn't matter - he was a messenger.
To me, the olive is a symbol of beauty, peace, and love - these things we wish for anyone who is near and dear to us. I am thinking of three sisters who are here now, honoring the lives and memory of three sisters who were here, decades ago. Taking my cue from the old man on the boardwalk, I'll pass his message along. As I get ready to leave tomorrow morning, I'll leave the olive branch behind, but not before I whisper to myself:

To Nonie, Mary Kay and Margaret....


Is for you.
Email Post
Labels: Goddesses in the Dirt