A Prayer for Alejandro

Note: I have arrived at the first stop on my journey and will post soon -- in the mean time, this story is for a writing contest I committed to before I left, since I was the one to choose the muse: Confession.
Thank you for reading♡ 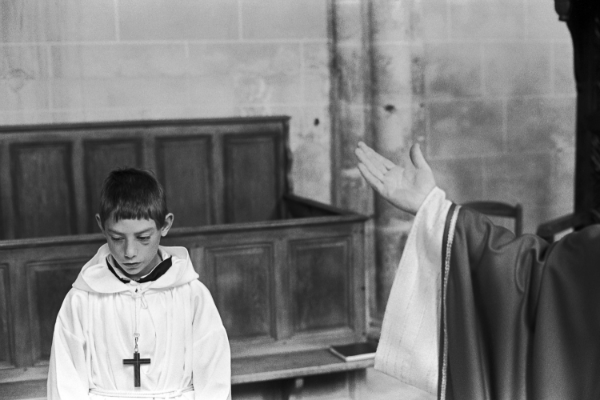 Bless me Father, for I have sinned.
Arturo squirmed in the pew and looked up at a flume of moonlight streaming through a stained glass window. Dust motes whirled within it, glinting like specks of platinum. Outside he could hear the carnival rides grinding and spinning, the sounds of peoples’ delighted screams floating back into the church and mixing with incense. Turning his body, he could see the Ferris wheel, his favorite, scooping up patrons and then, getting up speed, churning in the black night air, a psychotic blur of neon green, red and blue light. Whenever he got a chance to ride, he loved it best when his car was frozen at the very top, while patrons were loading or unloading, and he could see the jagged rocks that rimmed the coastline near his village. That was where he lived with his brother. He sat back on the pew, inhaled the incense, and closed his eyes. His job tonight would be to save Alejandro.
It was the festival of El Grito de Independencia and once a year, San Jose del Cabo would transform from a peaceful fishing village to a destination for everyone in the region. Families drove here with all their children, loaded into cars and trucks. They would sleep beneath the underpass outside town. He would see tent cities walking on the dirt road home, rough blankets hung from the concrete beams, cooking fires lighting up the night. When the families finally left town, their vehicles resembled the carnival rides, plastic whirlybirds, stuffed animals and piñatas overflowing from the windows, children hanging off the backs of trucks, drunk on cotton candy, hot chocolate and churros.
He knew Father Dominguez would be here soon and he was on a mission.  He recited what he planned to say over and over in his mind.
Bless me Father, for I have sinned.
-------------------------------------------------
The church of the Virgin of Guadalupe was a second home for Arturo. He loved sitting next to Mama on Sunday mornings, leaning against her doughy chest, and listening to Father Dominguez speak in his singsong-y voice from the lectern. Mama smelled like a mixture of cilantro and sandalwood. He would fall asleep during the Mea Culpas until Alejandro kicked him in the leg and they were off, crawling under the kneelers towards the back of the church, where Alejandro would light all the votive candles.

Father Dominguez was waiting. With his eyes fixed on the confessional door, Arturo rose from the pew, rehearsing the words he knew he must say.
Photo courtesy of Google images
Email Post
Labels: carnival church confession family Ferris wheel twins