I've written about Baubo before, but her controversial significance and potent healing power deserve to be revisited from time to time.

When Persephone, the beloved daughter of the Greek goddess of agriculture, Demeter, was abducted by the god of hell, Hades, into the Underworld, Demeter fell into a deep depression. She proceeded to wander the earth and let nothing grow until her daughter was returned to her. Members of the king's household desperately tried to lift the goddess from her despair, but to no avail.

One day, while sitting by a well, Demeter was approached by a strange little woman named Baubo. The two women started to chat, and when Baubo slipped a bawdy joke into the conversation, this elicited a slight smile in the goddess. Then Baubo proceeded to lift her skirts, revealing her genitalia and breasts, and began dancing around the goddess in a bawdy and sensual manner. Shocked into hilarity by the preposterous vision, Demeter erupted into laughter - deep belly laughter - which lifted her from her despondency. 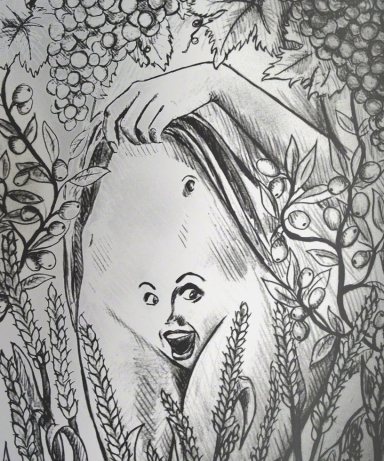 This story describes the power of reconnecting with parts that we have repressed or buried and, by doing so, cause us to become disconnected from our vitality. Baubo's display of her sensual and sexual self both illustrates the power and essence of the feminine as well as eliciting permission to laugh.  When we laugh at something truly and outrageously hilarious, we connect with a source deep within that frees us up, blasting through dense and stuck energies, connecting us with our own essence. As with Demeter's barren world, things come to life again, fertility and greening are restored to our internal landscapes.

As you can imagine, this story is bound to attract controversy. Anything that smacks of the slightest distastefulness, or that makes us uneasy, is a target for oppression. The innate sexual power of women has long elicited an opposing force that strives to clamp down on anything it condemns as shameful. During the Christian period, the tale of Baubo and Demeter was roundly criticized and censured. Clement of Alexandria was one of the loudest voices who tried his best to vilify and silence the meaning of the story.

Yet how can we wonder if Tyrrhenians, who are barbarians, are thus consecrated to base passions when Athenians and the rest of Greece – I blush even to speak of it – possess that shameful tale about Demeter? It tells how Demeter, wandering through Eleusis, which is a part of Attica, in search of her daughter the Maiden, becomes exhausted and sits down at a well in deep distress. This display of grief is forbidden, up to the present day, to those who are initiated, lest the worshippers should seem to imitate the goddess in her sorrow. At that time Eleusis was inhabited by aborigines, whose names were Baubo, Dysaules, Triptolemus, and also Eumolpus and Eubouleus. Triptolemus was a herdsman, Eumolpus a shepherd, and Eubouleus and swineherd. These were progenitors of the Eumolpidae and of the Heracles, who form the priestly [hierophantic] clan at Athens. But to continue; for I will not forfear to tell the rest of the story. Baubo, having received Demeter as a guest, offers her a draught of wine and meal. She declines to take it, being unwilling to drink on account of her mourning. Baubo is deeply hurt, thinking she has been slighted, and thereupon uncovers her secret parts and exhibits them to the goddess. Demeter is pleased at the sight, and now at least receives the draught, – delighted by the spectacle! These are the secret mysteries of the Athenians! These are also the subjects of Orpheus’ poems. It will quote you the very lines of Orpheus, in order that you may have the originator of the mysteries as witness of their shamelessness:


This said, she drew aside her robes, and showed a sight of shame; child Iacchus was there, and laughing, plunged his hand below her breasts. Then smiled the goddess, in her heart she smiled, and drank the draught from out the glancing cup.

In spite of commercials we see on TV and the display of sexuality in films, we live in an uptight culture, and women who are fully in touch with their bodies and their own sensual selves often appear to be intimidating. It's no surprise that the Catholic church gave women only two identities: Virgin or Whore. Such is the legacy we are left with in the 21st century.

A good friend of mine, raised Catholic like myself, was recently visiting her elderly mother during the Pope's visit to the States. Her mother wanted her to watch the Pope's Mass, and out of love for her mother, my friend agreed, but was quickly reminded why she had left the church so long ago. "All I could see was a sea of white haired males," she said,  and wondered out loud when women would be seen as equals in the church.

Good question. The story of Baubo reminds us that women's sexuality continues to be a controversial subject. Baubo may be just a little wizened old woman, and not one of the marquee level goddesses of the Greek pantheon, but her story rings just as true today as it did three thousand years ago. While her nature has been shamed, her message is one of empowerment: respect your deep and worthy treasures of sensuality, sexuality, laughter, knowing and honor thy self.
Email Post