Goddesses in the Dust: The Veiled Prophet

Unearthing the divine feminine, one archetype at a time...
If this looks creepy to you, raise your hand.

When I first moved to this part of the Midwest some years ago, I had no idea that customs, such as the debutante ball, continued. Our city's version, known as the Veiled Prophet, is held in December, but every July 4th the organization sponsors a fair, drawing over a million people to its annual fireworks display, one of the largest in the country. The Veiled Prophet organization does charitable work to enhance civic life, but its strange origins and traditions die hard, and there are folks who take this thing very, very seriously.

I mean, look at these guys. 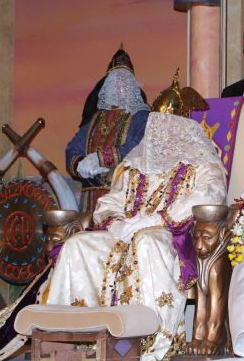 This definitely falls under the category of things that make you go hmmm?

While I was researching the origin of the Veiled Prophet I came across a book written by a woman named Lucy Ferriss. Back in 1972 she was 'presented to society' at the VP ball. Self described as a 'reluctant debutante' her book, Unveiling the Prophet, tells the story of how a militant organization called ACTION protested the event. This was the Vietnam War era, and a debutante ball for rich girls must have seemed deplorable in a city with overcrowded government housing projects and a country in which violent protests were breaking out on college campuses. It also must have seemed pretty outdated with women in the rest of the country burning their bras and fighting for equal rights.
At the 1972 VP ball that Ferriss attended, an ACTION protestor and civil rights activist named Gena Scott broke into the event and - in a move worthy of cinematic action heroines - slid down a cable into the auditorium and tore off the veil of that year's 'prophet'. Being unmasked from what Ferriss referred to as his "eerily Klan-like costume" was apparently a big deal, as the whole point is maintaining the secrecy of his identity.

According to historian Thomas M. Spencer, the Veiled Prophet organization was founded in 1870 to boost participation in a local agriculture and mechanical fair held in October. After a general strike in 1877 when railroad wages were cut, Spencer states the ball and parade were developed as more of a "show of power than a gesture of healing." 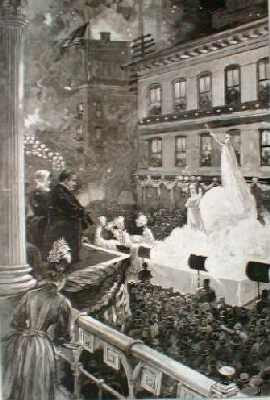 The businessmen who concocted the organization back in the 19th century based it on a poem by Thomas Moore, the Veiled Prophet of Khorassan, whose main character wore a veil to either cover up his beauty or ugliness, depending on the version. The founders' explanation for the veil was to assure the focus of the group's deeds remain with the organization as a whole and not on any one member. A New Orleans native named Charles Slayback, whose background was in grain sales, contributed many of the ideas for the Mardi Gras-styled affair. After the protests in the 1970s the VP's annual parade was moved to the 4th of July in an apparent attempt to transform the organization's identity from elitist to serving everyone.
Strangely, an early Veiled Prophet parade was themed the "Festival of Ceres," Ceres being the Roman name for Demeter, the Greek Goddess of agriculture. As readers of my blog probably know, Demeter is the mother of the Goddess Persephone, Queen of the Underworld, and her consort Pluto, or Hades, is known both as the God of Wealth and King of the Underworld. An organization that revolves around wealthy men, secrecy and a young woman who is chosen as the Queen of Love and Beauty bases its origins on not only a Middle Eastern-styled poem but mythological archetypes, and has powerful overtones of ancient Greek mystery cults.

As with all things anachronistic, this annual spectacle will undoubtedly continue to polarize people into two camps: those who love the ritual, and those who wonder why in the 21st century women would agree to don a ball gown
Photo credits: Google images, Osiris, Ladue News, St. Louis Today, Life magazine, Mardi Gras in New Orleans, Guest of a Guest