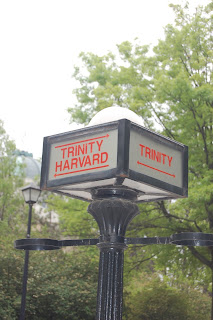 I live in a very old neighborhood designed by a radical but forward looking man named E.G. Lewis. Back around 1900 he started a women's magazine, chartered a bank (and stated two years later that it had been "assassinated") and then proceeded to design the country's first planned subdivision. His plat plan was based on an odd concept that makes you wonder about people's obsession with stuff like social standing - he created five main avenues with three perpendicular cross streets - all named after prestigious universities - and then put the biggest homes and lots on princeton, the next biggest on cornell etc etc until the last row of small abodes and tiny lawns on dartmouth (he must have had his own personal pre-U.S. News and World Report system of college listing.) The whole idea was -- that if an employee who lived in one of the tiny dartmouth houses wanted to bring his boss home to dinner he would drive into the neighborhood past all the grand homes on princeton and cornell and the boss would hopefully not notice that the houses got smaller and smaller towards the back of the subdivision. actually now that i think about it, it seems strange that you'd want your boss to think you lived in a big house - but then again, I'm not e.g. lewis and can't vouch for what was going on in his head.
All I do know is that I love the light standards he installed at the intersection of all those streets with the ivy league names. everything is so old in this neighborhood that almost all the houses are on the national registry of historic places and the lights are no exception. that bad news is that they're so old they often stop working for months ----- even years at a time. and sometimes moving vans back into them and knock them off their platforms - that happened twice in one year. I almost cried. 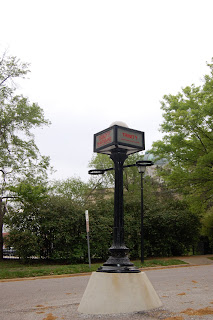 last time the standard was out at our intersection i spent months haranguing the local electric company until they came out. four times. i stalked the truck, made friends with the technician. learned more than i cared to about buried electric lines, corroded ancient wires. but when it came back on line i rejoiced.
on last night's walk took a photo 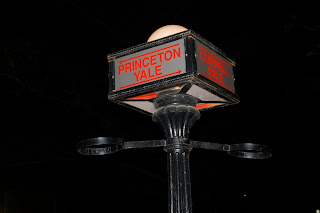 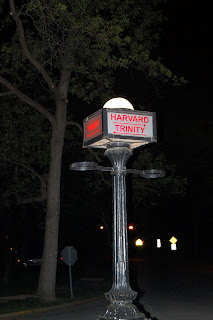 I don't know why i love these lights so much but i do.
But then again i like all sorts of lights.... those cheap christmas twinkle lights are strung around my house year round. on the deck. on any tree in the house that will support them. 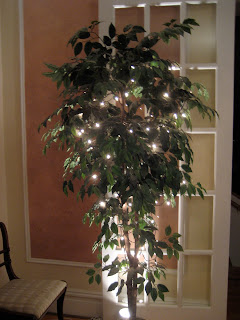 speaking of lights, a few nights ago there was a new moon - 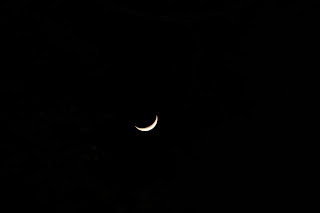 ends pointing upward reminded me of the minoan horns of consecration at the palace of knossos on the island of crete --- moon worshippers, fertility and all that good stuff.